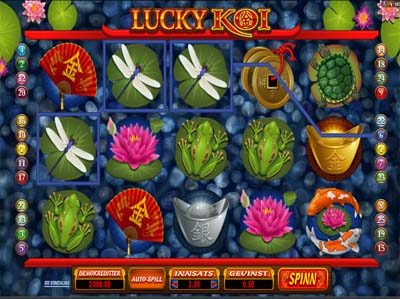 This game brings a vast amount of Eastern charm to your screen. The reels of it are set against a backdrop of shimmering water, most likely a babbling brook or stream, and there’s a very authentic Oriental soundtrack incorporated into it as well. In keeping with such a theme, it provides players with a selection of different icons, the first three of which are three animals on lily pads – the dragonfly, the terrapin and the frog. These are joined by four other symbols, the first of which is a water lily, the second is a Chinese fan and the remaining two lower paying icons exist in the form of a set of pendants and a silver ornament. There’s also the higher paying gold ornament and the two koi carps.

There’s a familiar layout of five reels and three rows included in the game, and Microgaming have also added a total of 25 different pay lines alongside this. These can be easily customised, simply by using the arrows at either side of the ‘Lines’ box, or by clicking one of the numbers from either side of the reels. Further to this, players can also change around the value of your bet placed, starting with adjusting the coin size between £0.01 and £0.50. The amount of coins you’re able to play per line can be altered between one and 10 as well, meaning that the maximum overall bet you can place stands at £125 per spin.

You’ll find that there is a wild symbol incorporated into this game, with the shape of the games logo. As a wild, this symbol will replace all other icons on the reels in. The scatter icion is however not replaced by the wild symbol. Should five wilds show up on a winning pay line, you’ll receive a win of 5000 coins.

The scatter icon which has been added to the game is represented by the beautiful Eastern scene, and as a scatter, it does not matter where it lands on the rells. Three, four or five of these coming in to view will trigger the ‘Bonus Choice’ round. Here, you can select from playing either the freespins feature, or the ‘Koi Bonus Feature’. The first of these provides between 10 and 30 freespins with up to a five times multiplier incorporated. The second requires you to choose between three and six carp from the pond in order to reveal coin wins.

This is definitely a nicely designed game, featuring relevant icons and graphics, as well as authentic sounds alongside. Not only that, but the specialities included within are very compelling as well.