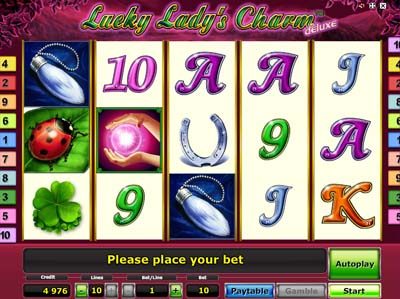 Do you consider yourself to be a lucky lady? Or perhaps you’re in search of one? In any event, this game from Novomatic brings all the charm and wonder of lucky charms to your screen. That would be the actual items, not the American breakfast cereal! As it stands, the game includes various different items that are closely associated with fortune and luck, including four leaf clovers, horseshoes, ladybirds and gold coins, amongst others. There is no incorporated thematic music, only Novomatic’s usual arcade ditty that plays every time the reels are spun.

There are five reels included in this game, and three rows to accompany them. A total of 10 pay lines have also been added to the product, all of which can be customised to your own personal preferences. The standard minimum bet is set at 10 coins, but this can be altered by changing the bet per line. This can be increased up to a maximum of 200 coins per line, thereby providing a maximum overall wager of 2,000 coins per spin to be taken advantage of.

The icon of the blonde-haired lady acts as the wild icon for this game, and this will stand in for all other icons on the reels to create a winning combination, except for scatter icons. Should it be included in a win, it will also double the pay out.

The game’s scatter symbol is the image of a pink globe being clasped between two hands. Three or more of these appearing anywhere on the reels will reward you with 15 freespins, which also activates a triple multiplier at the same time.

Lucky Ladys Charm Deluxe provides a substandard game with standard extra features and a regular soundtrack. It’s not a bad game in general, but it’s not one that will receive such wide recognition.