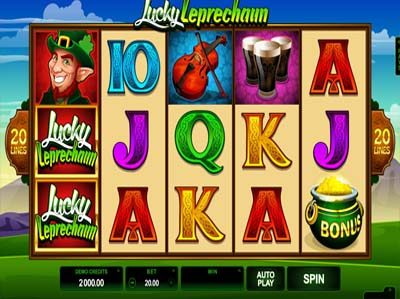 We all know the leprechaun as being a type of fairy from Irish folklore, and they’re usually depicted as little bearded men, wearing a green coat and hat, and are generally considered to take part in many forms of mischief, as well as having pots of gold that are left at the end of rainbows. Lucky Leprechaun, presented by Microgaming, takes this idea and very nicely blends it in to an online video slot game. It’s filled with super graphics, and you game play is watched on by the titular character, who stands at the left hand side of the reels, whistling at you whenever you’re taking your time spinning. The icons on the reels are made up of the regularly seen A, J, K, Q and 10 icons, as well as a four leaf clover, a green top hat and a couple of other speciality symbols.

When playing the game, you’ll be doing so on a five reel and three row layout, so you’ll have a fairly generic interface to spin the reels of. In addition, the developer has also added a total of 30 bet lines as well, but these can be very easily customised to suit your own preferences. Furthermore, you can alter the amount of the wager you place per round, and this is done by altering the value of a single coin between £0.01 and £0.05, while the amount you’re able to wager per line is changeable between one and five. This offers up a maximum overall bet amount of £7.50 per spin.

The first special feature included in this game can be seen straight away, and that’s the three progressive jackpot amounts displayed atop the reels. You’ll need to be playing at the maximum bet amount, and you’ll need to spin five progressive symbols into any location on the reels. This icon is represented by the pot of gold, with seven of them coming in to view paying out the highest ‘Gold’ jackpot.

In addition, there’s the icon of the leprechaun, and spinning three or more of these into scattered locations on the reels will trigger the bonus round. You’ll be presented with 12 green boxes, and you’ll need to choose three of them to find the freespins hidden inside. Then, you need to choose a hat to increase the bonus multiplier.

Finally, the silver and gold coin is the game’s wild icon, and as such, it will substitute for any other symbol on the reels in order to form a winning combination. The exceptions to this rule include the previously noted bonus round icon, as well as the progressive bonus symbol.

This game is definitely one of the more graphically superior offerings in the online gaming market, but its visual appeal is just one side of it, as the game play and special features incorporated into it are very entertaining as well.