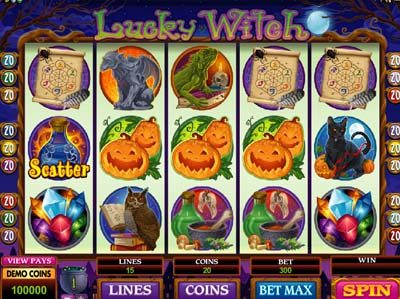 Can it be said that witches are known for being lucky? Well, we’re not entirely sure it’s so. But, this game from Microgaming would certainly have you believe it’s true. It’s a fun and quirky take on the life of a witch, presenting you with a visually pleasing game. Players will see that the reels hold several different icons relating to the base theme. These start with some menacing looking pumpkins. Following on from them is an icon of some sparkling gems and another of a cauldron and some ingredients. A magic scroll is next and then there’s a gargoyle. Higher paying icons are seen in the form of a lizard, an owl, a black cat, and finally, the lucky witch in question.

The design of this one is available on a five reel and three row interface. This means it should look familiar enough to players. You’ll also see that a total of 15 different pay lines are available within the game. These are changeable, simply by using the ‘Lines’ button. The stake that you place per spin is also adjustable. This is done by altering the coin value between £0.01 and £1. Then, you can change the amount of coins in play between one and 20. This means that you are able to play a maximum overall wager of £300 per round.

If you want to know how lucky this witch is, make sure you’re aware of the special features of the game first. You see, there’s a wild icon available in it firstly. This is the game’s own logo. As a wild it substitutes for the three animal icons and the witch icon, in order to form a win. Not only that, but it doubles the win when standing in for another symbol too. Furthermore, these icons can appear stacked on the reels as well.

There’s a scatter icon in the game as well, which is the potion bottle. As a scatter, it provides a payout wherever it shows up on the reels. Should three, four or five appear in any location, you’ll receive 13 freespins. During this round, the icon of the witch becomes wild and stands in for any of the animal icons. She’ll also double the win.

Finally, you’re able to trigger a mystery bonus round. This becomes active when the large cauldron symbol appears anywhere on reels one, three and five. There are four mystery rounds it can trigger, which are; Magic Potion Bonus, Pumpkin Bonus, Secret Vault Bonus, Spell Book Bonus.

We think that this game is actually quite impressive. It provides you with intriguing graphics, stellar gameplay and wonderful special features at the same time.