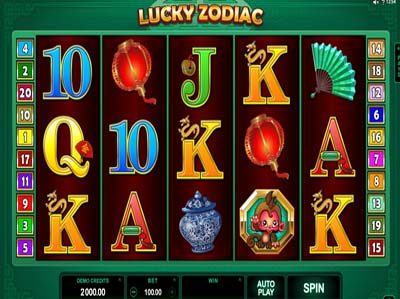 The zodiac is perhaps one of the most-known items around the world. Everyone was born at some time, and of course, that means they each have a zodiac sign. However, this game doesn’t really centre around that. Instead it looks at the Chinese New Year. Therefore, the game has an oriental theme to it. You’ll find that there are five lower paying icons on the reels. These are the usual A, J, K, Q and 10 symbols. Medium paying symbols exist in the form of a lily, an urn, a fan and a Chinese lantern. A few other symbols exist on the reels, providing it with some special features alongside.

Loading up the game will show you a five reel and three row layout. Also, Microgaming ensure that there are 20 separate pay lines in the game. You can alter these easily enough by pressing on one of the numbers shown down either side of the reels. You can also adjust your wager per round. You’re able to initially choose from a coin value of between £0.01 and £1. Then, you can alter the amount of coins in play between one and 10. This allows a maximum overall wager of £200.

As far as the specialities of this game go, you’ll find a few different additions. The first of these is the wild icon. This is the image of its very own logo. As a wild, it stands in for all other symbols to form a win. The only exception to this rule is the game’s scatter symbol.

And speaking of the scatter symbol, this is the batch of fireworks icon. Should you spin three, four or five of these into view, you will receive 12 freespins. This round has up to a seven times multiplier. You can trigger another 12 freespins during the round as well.

There’s an additional wild available as part of the freespins round too. This comes in the form of a monkey. Again, this substitutes for all other symbols, apart from the scatter icon.

Lucky Zodiac might not present you with the type of game you were expecting. However, what it does offer up is a visually pleasing design and interesting gameplay.