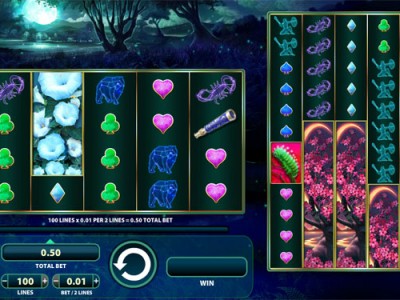 Lunaris takes place against a backdrop of moonlit fields and houses, and with a sparkling, effervescent night sky. The incorporated soundtrack is greatly matched to the game, invoking a feeling of wonder and relaxation to guide you through your astrological game. The reels have been filled with several illuminated pieces of nature, such as flowers, bushes and caterpillars, as well as various different constellations making up images of such things as scorpions and bears.

The game has two separate sets of reels, the first being the main reel and the second being the colossal reel. Both feature five reels, while the main one has four rows and the colossal one has 12 rows. There’s a total of 100 paylines included in the game, which can be decreased in denominations of 20. Furthermore, the coin value can be changed between £0.01 and £5.00 per two lines, allowing players to place a maximum overall wager of £250 per round.

The wild symbol is that of the zodiac, and this acts as a stand in for all symbols on the reels, except for mystery and bonus icons. This symbol appears on all reels, except the first reel of the colossal reel set.

The green butterfly acts as this game’s mysteryy symbol and appears only on reels one, three and five of the main reel set. Each mystery symbol awards five, eight, 10, 15 or 20 reveal symbols. These will randomly transfer to unique positions on the colossal reel set. Once all transfers are complete, reveal and mystery will reveal one symbol from the paytable except bonus.