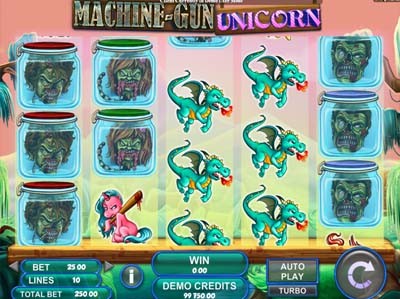 Machine Gun Unicorn starts with a relatively endearing video, which tells the story of unicorns living happily, only to be attacked by evil zombies. The unicorns fought back, but were soon overrun by the walking dead. It’s now their time to fight back once more, and the game features an altogether 80s hard rock soundtrack to assist you in doing so. The symbols on the reels feature unicorns and dragons all readying themselves to battle the zombies, all of which also exist on the reels in glass jars.

The game itself has five reels and three rows worth of an interface, while there’s a total of 10 paylines included that cannot be customised. The wager placed can be altered between the minimum of £0.01 up to the maximum of £10.00 per payline, giving players the opportunity of placing a maximum overall wager of £100 per spin. A turbo button has also been included in the game, for those players who don’t like waiting for the reels to go through the motions.

The name of the game is Machine Gun Unicorn, and this game features a symbol of a unicorn with a machine gun as its horn. This acts as the game’s wild symbol, and in doing so, will substitute all other symbols to create a winning combination. This only appears on the central reel of the game.

In addition, if the Machine Gun Unicorn symbol appears on the reels, regardless of whether or not it creates a win, all zombie icons will explode. A credit value is awarded for every zombie that explodes. If there aren’t any zombies on screen when the unicorn appears, a special credit is added to your balance instead.

Machine Gun Unicorn may not be overflowing with special features, but the game does provide a compelling product to play, with great theme music and an intriguing back story.