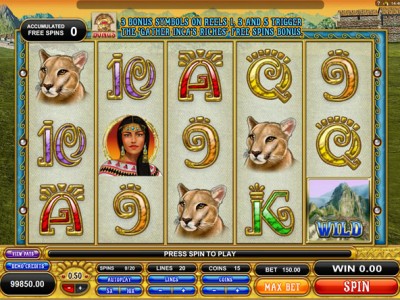 If you’re a fan of historical civilisations, then you’ll no doubt have heard of the 15th-century Incan site known as Machu Picchu, located 2,430 metres above sea level in the country of Peru. Well, now you’re able to experience all the lost treasures of Machu Picchu, in this product presented by Leander Games. Spinning the reels will open you up to several standard symbols, but featuring an Incan design, while other icons on the reels include an armadillo, a mountain cat, and two ornately dressed Incan people.

The game itself is laid out with a five reel and three row interface, and there’s a total of 20 customisable paylines included as well. The in-game coin value can be switched between the minimum of £0.01 and the maximum of £0.50, which allows all players to place an overall maximum wager of £150, by maxing out the amount of coins utilised at 15. An autoplay feature allows you to spin the reels five times or 10 times over at a predetermined wager.

Machu Picchu has a wild symbol, which is represented by a scenic shot of the mountains in Peru. This will act as a stand in icon for all others, except scatter and bonus icons, in order to make up a winning combination.

The image of the llama is the game’s scatter symbol, which will pay out multipliers of your wager placed.

If you spin the symbol of the two Incan people on the same payline on reels four and five, you’ll trigger the “Llama Deification” feature, and a single freespin is accumulated for the next entrance to “Gather Inca’s Riches” freespins bonus.

In order to activate the “Gather Inca’s Riches” freespins round, you need to spin three bonus symbols on reels one, three and five in any position, which is represented by the gold Incan bust. You will be given seven freespins, plus any accumulated freespins from the “Llama Deification” round. At the start of this round, you need to select from one of four options that represent the Inca’s work. During freespins, this symbol will payout with a multiplier.

Machu Picchu is a somewhat intriguing game with a very interesting theme to run off, and Leander Games has provided a product that’s definitely worth spinning a few rounds on.