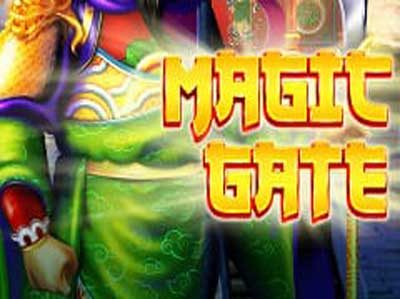 If you think online slot machine developer Red Tiger Gaming has already had its fair share of Chinese themed slots, guess again. Magic Gate is just another one of those slots and it’s as traditional as you get. It has all the customary red and gold contrasting colors that we recognize from pretty much any other slot in this genre. The lower value playing card symbols, however, have still kept that hand-painted, calligraphy touch, which makes them fairly unique. They include A, K, Q, J and 10. As for the higher value symbols, they all represent gold objects of different kinds. Such are, for example, the gold heart pendant, a coin and some knot work. The last one also has the words Magic Win on it and will also offer you payouts of up to 300 times your stake. 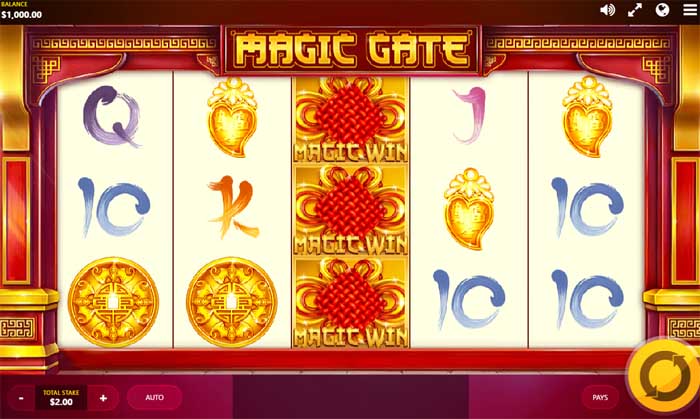 As for the layout, things are pretty boring here: there are 5 reels with the customary 3 rows and a total of 20 paylines. You will notice that the number of paylines is fixed and, therefore, not subject to change. You can, however, freely adjust your betting value at the bottom of the screen. Wager amounts can range from 20p per spin up to a maximum of £500 per spin. The RTP is the standard for this developer 96,10%.

There are a number of special features and different extras in Magic Gate. But let’s first get the more mundane Wild symbol out of the way. It comes in the form of a dragon and can replace any of the other symbols. That way it can help you create winning combos. In addition, it’s also the most lucrative symbol on these reels with payouts reaching up to 400 times your stake. However, it cannot replace any of the other special symbols.

One of them is the Bonus symbol, which in combination with the other special symbols can give you one of two bonus features. Land two Bonus symbols together with the Golden Bell symbol and you will trigger the Golden Bell Bonus round. A pick-me game will then award you various multipliers. If you land two Bonus symbols in combo with the Freespins symbol, you will receive a random number of freespins. During this round, you can also trigger the other features more often. 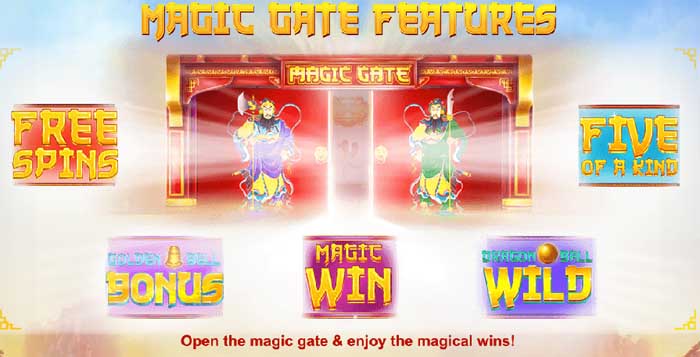 In addition, there are three more extra features, such as the Dragon Ball symbol. It will transform random symbols on the reels into Wilds. As for the Magic Win symbol we described earlier, it can also award you a random cash prize. And last but not least, there’s the 5 of a Kind feature. In order to trigger it, you will need to land the Five of a Kind symbol. This will award you a five of a kind payout for any given symbol.

Magic Gate offers a pretty steep variance, so special features won’t come along too often. But when they do, they can surely make it worth your while with massive payouts.