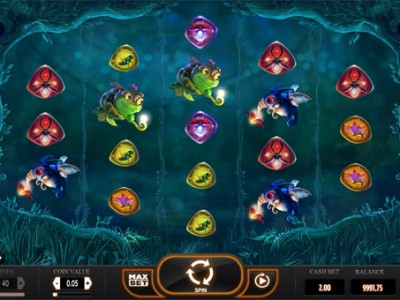 What do you think you would see if you took a trip on some Shrooms? Well, this game could possibly provide a clear idea. The accompanying music suggests that everything would be sort of calm, while the imagery seen on the reels is altogether quite surreal. There’s a crazy looking frog, insects trapped in various different jewels, an unhappy looking tree animal and what seems to be a flying rodent.

There are three wild symbols included in the game, each of which appears in different locations on the reels. They’re all shaped like mushrooms, of course, with reels one and five playing host to the purple-headed one, which acts as a standard wild. Reels two and four will see the blue-headed mushroom appear, and this will act as a multiplier wild, offering between times two and times 10 on your win. Finally, spreading wilds, represented by the red-headed mushroom, only appears on reel three. This will alter up to four symbols into wilds. All wild symbols act as a stand in for others to create a winning combination.

Magic Mushrooms offers an entertaining game filled with a strong selection of extras to provide an appealing game.