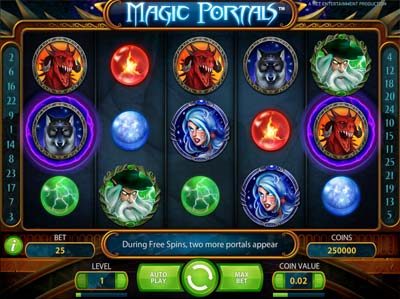 If you’re a fan of the MMORPG type games, such as World of Warcraft, then you might just have found the perfect video slot game for yourself in Netent’s ‘Magic Portals’. It takes on all the thrills of such online products and presents them all in a new environment of reels and rows. As such, you’ll find magic, supernatural beings, elemental powers and much, much more in this one. There are six standard icons available to see on the reels, which are divided into three animals – those being the owl, the wolf and the dragon – and three elements – those being lightning, fire and frost. Finally, joining these are three character symbols, those being the two elven women (one in fire red and the other in frost blue), as well as the evil-eyed sorcerer.

The five reels and three rows of the game should also provide a fairly regular layout for frequent video slots gamers, and the developer has also added a total of 25 different bet lines into the game as well. Customisation of these is not a possibility, but players do have the chance to adjust the wager that they place, which is done by first of all altering the coin value between its minimum of £0.01 and £1 per line. The bet level can also be switched between one and 10, and if you do maximise these, the overall wager you place will stand at £250 per round.

A game entitled Magic Portals should surely have some interesting added extras, and this one certainly does. These start with the Magic Portals Wild transformation, and this is in effect during both the main game and freespins. If two or more matching symbols stop in the black portals on reels one and five, all instances of that same symbol appearing on the reels will be converted into wilds. Of course, wild icons will substitute for any other icon on the reels, except for the freespins symbols.

And as far as the freespins round is concerned, you’ll need to spin a ‘Free Spins’ icon into both the left and right portal at the same time. At this time, you’ll be rewarded with 10 freespins of the reels and additional freespins can be won during this round as well.

Often overlooked by other games, this particular product is one of the more intriguing and graphically pleasing games presented by Netent on the whole.