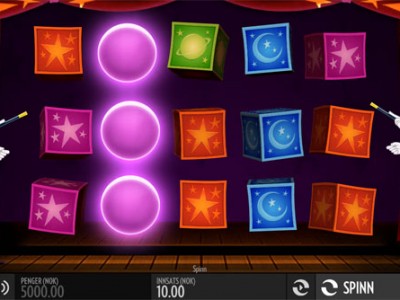 Who doesn’t like all the thrills that a magician and his entire act can bring? The magic wands, the top hats, the rabbits that go inside them, card tricks, sawing people in half – all the usual things you’d expect to find at such a show. Well, Thunderkick has crafted together its very own slot game based on the thrills of a magic act, and have called it Magicious. Hosted by the magician, Illusious and his assistant, Magicia, this game will provide you with reels filled with various differently-designed magic boxes.

Each winning combination created across the five reel, three row interface will see either Magicia or Illusious zap them with their magic wands, and with the game including a win-both-ways feature, you can be sure of that happening on a vastly more frequent basis. There’s 10 fixed paylines incorporated, and the available bets are of the usual Thunderkick kind, beginning from £0.10 and rising to £100 per spin.

The game’s first extra feature is an expanding wild symbol. This comes in the shape of a circular orb and as soon as it appears on a reel, it will expand to cover the entirety of it. It will only show up on reels two, three and/or four, and will set the reels off on a re-spin as well, with the expanded wilds staying in place for it.

The other special feature in the game is the already previously mentioned, win two ways addition, providing extra opportunities for winning combinations.

While Magicious is a good game for its added features and graphically pleasing layout and gameplay, with such a strong subject as a magic act, we can’t help but feel that Thunderkick could have done a little bit more with it. However, what has been incorporated has been done to the highest level, and it’s still an entertaining game on the whole.