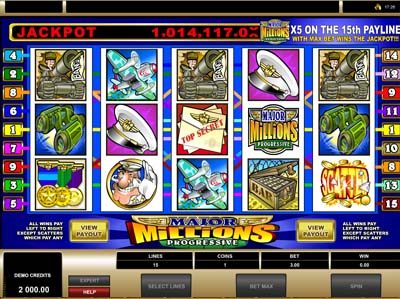 Major Millions is one of Microgaming’s most well-known progressive jackpot slot games, and it’s all based on a celebrated old sea dog of a captain. While it may not feature the vastly impressive graphics and animations of more recent games from the developer, it does have some entertaining game play on the whole. As far as the symbols of the game are concerned, there are various different ones of these incorporated, such as the night vision goggles, the army medals, the huge tank, the top secret documents, and the aeroplane flying high in the sky. The major himself also appears on the reels.

It’s played on a five reel and three row interface, and Microgaming has also included a total of 15 different pay lines alongside this. You can customise these either by using the ‘Select Lines’ button, or by pressing on one of the numbers from either side of the reels. You can also adjust the value of the wager you place per spin as well, and this is done only by changing the amount of active pay lines. The coin size is set at £0.20, and with the total 15 lines active, the maximum bet is 300 coins.

There’s a wild symbol included in this game, which is represented by the Major Millions logo. As a wild symbol, this will stand in for any other icon on the reels in order to form a winning combination, with the only exception to this rule being the scatter symbols. Any win which incorporates this wild logo will also triple your pay out.

The scatter icon which has been added to the game is represented by the word, ‘SCATTER’ being blasted apart. Scatter wins are added to pay line wins and they will multiply your wager placed by a specific amount, with five offering a multiplier of times 50.

Finally, in order to win the progressive jackpot displayed at the top of the reels, you need to spin five of the wilds on to the 15th pay line. Furthermore, you’ll need to be playing the game at its maximum bet level.

The overall feel of this game jackpot game from Microgaming may be that it’s a little bit old when compared to other products, but the fact that it includes the aforementioned jackpot, as well as a wild and scatter, does make it that much more appealing.