Max Damage and the Alien Attack 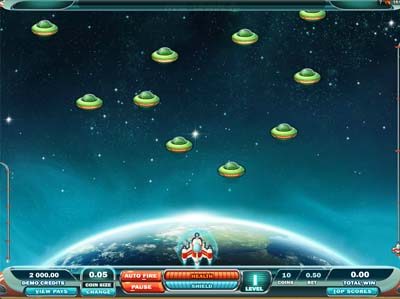 This game from Microgaming definitely provides an alternative to what a regular slot game looks like. Often found in the slot machine category of a casino, it’s really not such a game. In fact, it’s quite far away from being a slot machine, with the exception of placing wagers. It’s basically an arcade type of game where you take on the role of a pilot of a space craft flying through alien territories. That being the case, you need to defend the earth from the alien attack through nine different levels. Players of the game will see that a large amount of effort has gone into the game’s graphics though. And gameplay is thoroughly entertaining too.

Like we said, there aren’t any reels or rows in this one. It’s just a wide open screen on hand with a different background in view each time you move onto the next level. Your ship is seen at the bottom of the screen while the aliens invade from the top. Players can change the coin size per level between £0.01 and £2. A total of 10 of these coins will always be in play. This means that a maximum wager of £20 is available to play per round.

As the aliens fall from the top of the screen, you need to shoot them with your ship. An ‘Auto Fire’ button will see fires shot on a constant basis. You then need to move the space craft with your left and right buttons on your keyboard. However, there are also some special features in the game too.

You’ll be able to collect orbs of additional power as you go along though. Certain alien ships will drop boosters, with four different ones being available. These exist in the form of ‘Life’, providing you with an extra life on top. ‘Health’ is another one, increasing your current health level. ‘Shield’ replenishes your ship’s shield, while ‘Damage Booster’ increases the amount of you do.

Freebies also exist in the game, which players can collect. These allow you to fire special weapons off at the aliens. The freebies include a laser booster, a wormhole, blockade, a nuke and free missiles.

If you destroy one of the alien boss ships, you’ll have the chance to win up to 110,000 coins. These will appear at the end of levels three, six and nine.

This game can’t really be judged as a slot offering, because it actually isn’t. However, as an arcade game, it’s really intriguing on the whole.