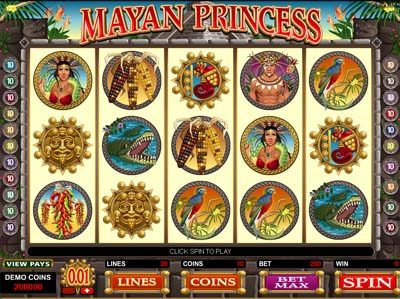 The Maya civilisation was a Mesoamerican nation developed by the Maya peoples, and it is noted for its hieroglyphic script, art, architecture, mathematics, calendar and astronomical system. Now you’ll be able to go back in time to the time of the Maya by playing the online slot game from Microgaming, entitled Mayan Princess. While you’re playing this one, you’ll be accompanied by a particularly Spanish-sounding piece of music, and you’ll find various different thematic icons as well. These start with six lower paying icons in the form of chillies, three sweetcorn husks, an alligator in the river, a colourful bird, a Mayan man and a second red bird. Higher paying symbols come in the form of a sun icon, a leopard and the princess herself.

This game is played on a total of five reels and three rows, and Microgaming have also incorporated a total of 20 separate pay lines. You do have the chance to adjust these, simply by using the ‘Lines’ button or by clicking on a number down either side of the reels. You can also alter the value of a single coin between £0.01 and £0.50, while you can also change the amount of coins played per line between one and 10. This allows a maximum overall wager of £200 to be played.

There’s one or two specialities included in this game, starting with its wild symbol. This is represented by the game’s logo, and as a wild, it will stand in for all others, except for the pyramid icon. Five of these appearing on a winning line will provide a maximum pay out of 5,000 coins.

As mentioned, there’s also a pyramid symbol incorporated into the game, and this acts as the game’s freespins bonus icon. The freespins round is activated whenever a pyramid icon stops in any position on reel one and reel five. This provides you with between 10 and 20 freespins, and this round comes with a two times multiplier.

We love a game that integrates ancient civilisations into its theme, and Mayan Princess is one of them. It includes high quality graphics and game play, and it’s a very welcome and pleasing addition to this developer’s portfolio.