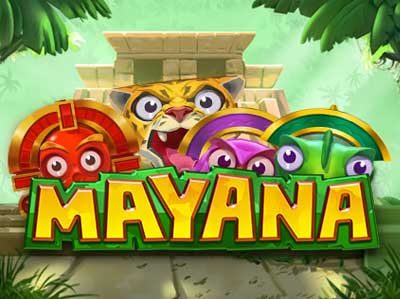 Mayana is an online slot game by software manufacturer Quickspin. This is a slightly unusual offering, as you will see once we get to the game’s setup. But it boasts good quality visuals and conjures up a pretty pleasant overall atmosphere. As you might be able to guess from the title, the focal point of this slot game is the ancient Mayans. And therefore the backdrop of the game takes you deep into the Mesoamerican jungles. There’s rich greenery with huge leaves and long vines hanging from the tree branches visible alongside the reels. And the reels themselves are made of rough stone blocks, imitating the structures of the Mayans. If you look closely, you will also see they are standing on a small stone pedestal. In addition, there’s also a pretty pleasant soundtrack in the background to add to the jungle vibe. 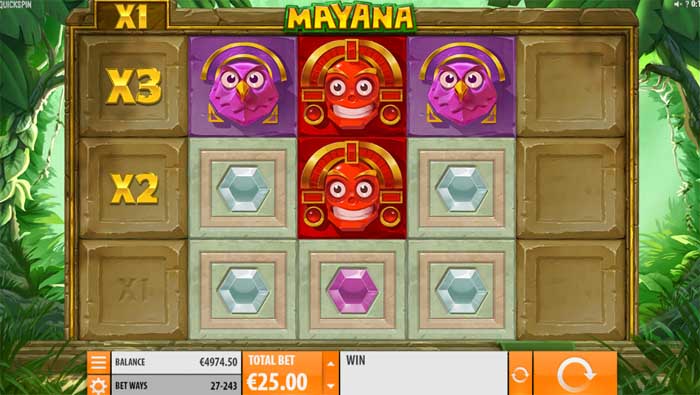 As for the symbols on these reels, they’re quite unusual as well. First in line are the four lower value symbols. Each comes in the form of a little jewel, and each comes in a different color. But they all offer the exact same payouts. The colors in question are white, blue, green and purple. Then we have another four symbols – the higher value ones. They start off with the depiction of a frog head, following which is a purple owl in the same style. Next, there’s an increase in value for the snarling leopard head. And last but not least we can only assume is some Mayan deity, bright red in color. This is the most lucrative symbol on the reels. As for the layout here, it features 5 reels by 3 rows. However, the outermost two reels don’t spin – only the middle three do. The initial number of paylines is 27, but the grid may expand during gameplay to include the remaining two reels. And with it, the number of paylines will also increase to up to 243. As far as betting goes, stakes in this offering range from 25p per spin and up to £100 per spin. Mayana has an RTP of 96.63%.

One of the main unique features of Mayana is that every winning spin will grant you a respin. Moreover, for the respin, you will notice the grid will expand to include the bottom symbols on the first and last reels. In addition, the symbols forming the winning combination that triggered the respin will remain in place for that respin. If you happen to land more symbol of that same type as a result of the respin, you will also receive a second one.

This, in turn, will uncover an additional symbol on each of the two outermost reels. Just as before, the symbols forming the winning combos will remain in place for the remainder of the second respin. Only on top of that, you will also benefit from a 2x multiplier. So, any wins you land as a result of that spin will be doubled.

Then last but not least, if you get more winning symbols on the second respin, you will trigger a subsequent third respin. As a result of this, the grid will expand to include all 5 reels and giving you the maximum of 243 ways to win. And better yet, with all the winning symbols locking in place, you will also benefit from a 3x multiplier!

In addition, Mayana boasts yet another feature, only this one occurs randomly. However, it can only take place if you have already expanded the grid to its full 5 reel by 3 row potential with all 243 ways to win. This is the Mucha Mayana feature, which can increase your 3x multiplier to anything ranging from 4x to a whopping 20x. As we pointed out, the feature takes place randomly. So, the multiplier value you receive will also be a random one. But this just about covers the amount of available special features. There are no freespins, no pick me games, no gamble features or similar. And there’s also no Wild symbol to replace any of the other icons or a Scatter that could offer you scattered payouts.

Mayana is a pretty neat medium variance slot machine by Quickspin. So, you can count on a good balance of fairly decent wins all throughout gameplay. It’s pretty dynamic, though it lacks any of the traditional special features you might expect from the very best online slots. On the other hand, we found the unique features and different take on gameplay rather refreshing. However, it might prove a little tricky to get all the way to the third respin. And it may be trickier yet to trigger the Mucha Mayana feature, although it will be sure to offer you pretty grand rewards. Furthermore, the graphics are pretty great and a have a fun feel about them.