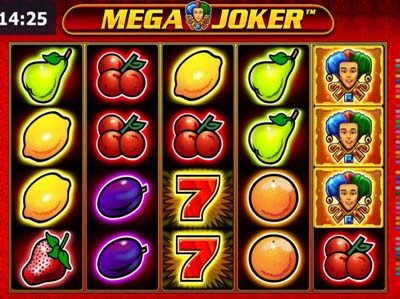 Mega Joker is yet another retro themed slot game by software manufacturer Novomatic. The game is rather simplistic in its design, though the setup is only a tiny bit more complex than what you might expect from slots with a theme like this and from this particular provider. First of all, let’s outline what you will be looking at as soon as the game loads. A deep red backdrop with nicely darkened edges has the Joker and game logo stamped across it. As for the reels, they picture all the most stereotypical old school slot machine style fruit and other symbols. Such are the cherries, lemons, orange and plums. Following them are the grapes, watermelons, pears and the rather unusual strawberries. Lastly, we have the lucky number 7s, the Joker and the gold star.

Moving on to the setup, it’s slightly different from what Novomatic fans might be used to. It features 5 reels and 4 rows, instead of the customary 3. In addition, there are 40 paylines, but you are free to adjust their number in the game settings. Finally, you can bet with as little as 40p per spin all the way up to £80 per spin. The RTP is at the customary mark of 95.05%.

Let’s begin by saying that unlike other vintage styled games, this one actually features both a Wild and a Scatter symbol. The Wild comes in the shape of a Joker, who can substitute for any of the basic symbols to become part of winning sequences. He can appear anywhere on the reels and is also the second most lucrative symbol on these reels, offering payouts of up to 2,000 times your line bet.

Obviously, the only symbol that the Wild cannot replace is the Scatter, which here is the golden star. Landing 5 of these symbols at a time will offer you payouts of a whopping 16,000 times your line bet. However, don’t expect it to activate any bonus features. Those are absent here. Instead, you can count on a double or nothing side game to spice up gameplay, if you’re feeling lucky.

The side game is offered within the Gamble feature, which will give you the opportunity to increase (or lose) your prize after any winning spin. After each spin you can choose to either gamble your winning or collect them. By choosing the former, you will enter the side game, which will present you with a deck of playing cards. The objective is simple: you need to guess the color of the top card correctly in order to double your amount. If you’re wrong, you will lose that amount and the feature will end.

Mega Joker is a unusually enticing game for a slot that has no freespins and no other bonus features. The Gamble feature offers a nice touch, but the presence of a Wild and a lucrative Scatter make regular gameplay dynamic enough to keep you spinning those reels.