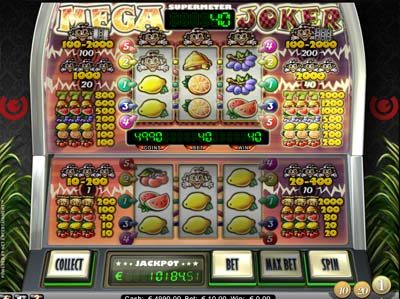 As far as classic online slot games go, they can tend to all look and feel the same when playing them. And one of the reasons that we enjoy playing Netent’s ‘Mega Joker’ slot is because it veers away from this particular issue. Instead, it offers up a bit of a twist on the traditional machines, providing gamers with a unique take on them as an alternative. Nothing much is different as far as the imagery on the reels is concerned, as they still maintain the classic fruit icons. Therefore, you’ll be spinning through symbols of cherries, lemons, watermelons, grapes, oranges, and of course the additional bells and 7s. There’s also two sets of reels, which we’ll explain a little later on.

Both reel sets are three strong, and each has three rows as well. A total of five pay lines have been injected into the product by the developer, and these cannot be customised in any way. However, gamers do have the chance to alter the amount of the wager they play per spin, and this is done first of all by choosing a coin value from the bottom right hand corner of the screen. There’s a coin worth £0.10 and another worth £0.20. Then, if you click the ‘Bet’ button, you’ll be able to change between playing a single coin or 10 of them per round. This means that a maximum overall wager of £2 per round can be placed.

Being a game which takes on the roll of a classic slot machine, Mega Joker doesn’t really feature any sort of overwhelming specialities. The only thing it does provide is its second set of reels, and this is where the ‘Supermeter Mode’ comes in to play. This is actually triggered at the end of every winning combination round in the main game, and you’ll instantly see the second reel set light up. You have two options here – either collect your winnings as they are, or played the supermeter round to try and increase them.

Playing the round will see you spin on reels with extra icons included on them as opposed to the base game, and you’re able to wager amounts in increments of 20 coins, up to the maximum of your total winnings from the triggering round. The collect button can be used at any time to end this mode and return to the main reel set.

If you’re a fan of the traditional games, but also like a little bit of a twist on such, Mega Joker is definitely the product for you!