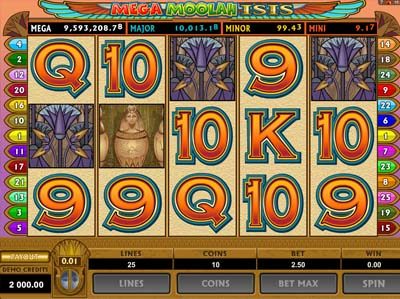 This game takes the success of the original Mega Moolah progressive slot game and it instils an Egyptian theme behind it so as to bring a new theme to light as part of the series. Of course, this one also features a selection of four jackpots as well, and these can be very easily seen atop the reels. The icons of the game are presented in the form of A, J, K, Q, 9 and 10 symbols, and these are joined by the Egyptian-themed symbols which come in the form of a beautiful flower, a set of Egyptian columns, sarcophagi, the Eye of Horus and a golden staff.

As far as the interface of the game is concerned, you’ll find that it’s presented on a five reel and three row layout. Microgaming has also included a total of 25 different paylines, and these can be customised to suit your own personal needs. These are adjusted by using the ‘Lines’ button or by clicking on a number on either side of the reels. Furthermore, you can change the amount that you wager per spin as well, and this is done by altering the the coin value between $0.01 and $0.05. You can play a maximum of 20 of these coins per active pay line, so should you increase these features up to their highest levels, you’ll be playing the maximum overall wager of £25 per spin.

The symbol of Cleopatra is the one that will provide the game with its wild icon. As a wild, it will replace all other symbols on the reels in order to form a winning combination, and it will also double your pay out as well. The only symbol it doesn’t substitute for is the scatter icon.

And speaking of the scatter, this is represented by the flying eagle. These symbols are what will trigger the freespins round, and you’ll need to spin three of them to receive 20 freespins. Four scatter icons will give you 25 freespins, and five of them will ensure that you receive 30 freespins. Any wins formed during this round are multiplied by times six.

Finally, you’re able to win one of the progressive jackpots when the randomly triggered bonus round is in action. This sees you spin a wheel of fortune, and depending upon where it lands, you could receive a cash pay out or one of the jackpots.

The Isis version of this slot game provides a very appealing take on the original, ensuring that you’re fully entertained from start to finish.