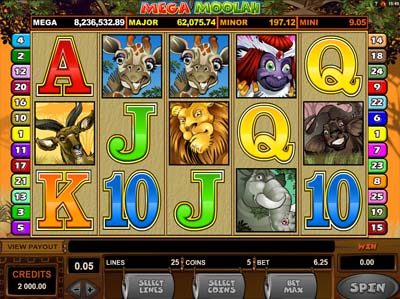 Mega Moolah from Microgaming is perhaps known as one of the most popular online progressive jackpot slots, and this is most likely because it has paid out huge amounts. However, not only that, but it has some intriguing game play at the same time as well. It’s base theme is centred around the animal kingdom, and therefore, you’ll find that the reels are home to a giraffe, a lion, an antelope, a zebra and an elephant, and these are joined by an icon of tribal woman of some sort. Each of the icons has been designed with some top quality graphics, while the four progressive jackpots included can be seen atop all of the reels.

The display of this game is presented to you on a five reel and three row layout. Alongside this, there are 25 separate pay lines included, and these are fixed in place by the developer. However, players do have the chance to change around the wager that they place, and this is done firstly by altering the value of a single coin between £0.01 and £0.05. You can also adjust the amount of coins played per line as well, and this allows you the chance to place a maximum overall wager of £6.25 per round.

The game includes a wild icon in its offerings, and this is presented by the symbol of the lion. As a wild, it will stand in for all other symbols on the reels in order to form a winning combination, with the only exception being the tribal woman scatter icon.

And as far as the scatter is concerned, you’ll need to spin three or more of these on to the reels in order to trigger its special feature. Should you do this, you’ll be given 15 freespins, and when this round comes into play, all wins will also be tripled.

Finally, as has been noted, there are four progressive jackpots included in the game. The higher you bet, the higher your chances of winning one of them are. The bonus round is triggered at random, and it will present you with a wheel of fortune. This is where you’re able to win one of the progressives, depending upon where the wheel lands.

Mega Moolah is probably the most well-known jackpot game in existence, and it’s clear to see why. It’s compelling, entertaining, feature-filled and provides you with the chance to win big money. Depending on the size of the jackpot, the RTP of this slot machine varies from 88.15% up to 96.98%