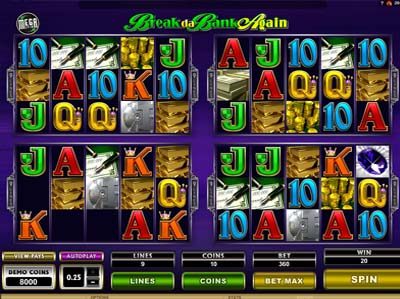 What’s better than playing a slot game? Well, playing four at the same time, of course! That’s exactly what kind of opportunity this Microgaming offering provides. Mega Spins Break Da Bank Again builds on the success of its predecessors splendidly. And of course, if you’re spinning four sets of reels, there’s the chance of receiving four times the pay out. Each of the reel sets contain the same types of icons. These exist in the form of A, J, K, Q and 10 symbols initially. Joining them are five additional symbols. They are the stack of gold coins, the cheque book and pen and the wads of cash. The remaining two are gold ingots and a shining gemstone.

Each of the four sets of reels contain three rows and five reels in total. There are also nine different paylines in each of them. You can use the ‘Lines’ button in order to adjust these to your own preferences. Other customisation is available as far as the wager that you place goes. You’re able to alter the value of a coin between £0.01 and £0.25. Meanwhile, you can switch around the amount of coins in play between one and 10. Therefore, a maximum overall wager of £360 is possible.

Of course, the main attraction of this game is the fact that you can play four rounds at once. This also means there’s four times the chance of spinning specialities into play. The first of these specialities is the game’s wild icon. It’s the logo that represents this symbol. All wins with this symbols substituting for others will pay out times five. However, during freespins, it pays out times 25! The only icons it won’t stand in for are scatters.

And the scatter icon is that of the silver vault door. You need to spin three, four or five of these onto the reels to win 15, 20 or 25 freespins. All wins earned during this round pay out a five times multiplier. Furthermore, each additional vault icon rewards you with an additional freespin. There’s actually the possibility of winning up to 100 freespins in total!

This one might not have the stellar graphics and design of many others. However, what it does have is a unique interface and overall intriguing gameplay. Break da Bank again are also known for their big potential in the bonus features, so playing four of them at the same time means that you don’t have to wait that long for the bonus feature.