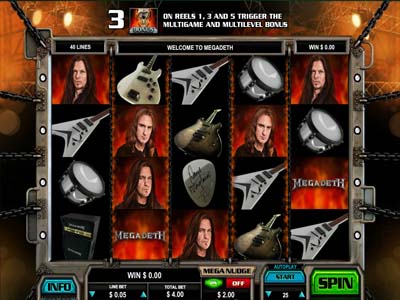 Megadeth are considered one of the big four thrash metal bands, alongside Slayer, Metallica and Anthrax. However, there’s one thing that Megadeth can say they have, that the other three don’t. A slot game!

Yes, you’ll be able to spin through reels featuring icons of all four band members, as well as symbols of their respective instruments and accessories – two electric guitars, a drum, a bass guitar, a plectrum, and an amplifier. All the necessary equipment for a heavy metal band. And what would a music game be without actual music? So, if you’re a fan of Megadeth’s tunes, you can be sure to hear guitars, drums and all the rest of it while the reels spin.

In terms of the actual slot game, you’ll be presented with five reels and four rows worth of a layout, complete with 40 fixed paylines. The coin value can be altered between the minimum of £0.01 and the maximum of £0.25, giving a standard maximum wager of £10 per spin. Alternatively, if you add the Mega Nudge feature, you’ll wager an extra £10 on top, giving an ultimate maximum wager of £20 per spin.

The symbol of Dave Mustaine is the game’s wild symbol, naturally, but this also acts as an expanding wild, which will cover the entirety of the reel it’s on, and then act as a substitute for all other symbols to create a win, except for the Vic Rattlehead bonus symbol.

The image of the skeleton with sunglasses on is the game’s bonus symbol, and spinning three of these in any position on reels one, three and five will trigger the ‘Multigame and Multilevel’ bonus round. Here, you need to spin the Mega Wheel to go to ‘Hangar 18’ freespins bonus, ‘Head Crusher’ bonus or receive an instant win.

Megadeth is definitely a game that’s not only great for fans of the band’s music, but also for anyone who enjoys a great slot game with multiple added features.