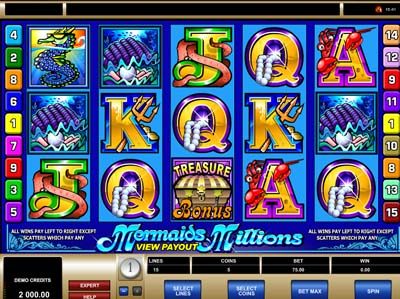 How would you like to dive to the bottom of the ocean to try and secure yourself some big money? Well, that’s exactly where you’ll be going when you play the Mermaid Millions slot machine game from Microgaming. It will have you on an underwater adventure of the spirited kind, and you’ll be spinning through reels of sealife-adorned A, J, K, Q and 10 icons to start with. These are joined by icons of a cool seahorse, an oyster bearing its shiny pearl, and an ornate chest with various gemstones inside it.

As far as the game itself is concerned, it’s played on a total of five reels and three rows, and Microgaming have included a set of 15 separate pay lines alongside. You’ll find that these lines can be customised to suit your own personal preferences, so you’ll be able to choose from a coin value of between £0.01 and £5. while adjusting the amount of coins added to each line between one and five. This allows players to risk a maximum of £375 per spin.

This game provides players with a few special features, starting with the wild icon of the king of the mermen. Functioning as a wild, it will replace all other icons on the reels, except scatters and treasure chest bonus icons, in order to form a winning payline. Should five of them appear on a certain payline, you’ll win the maximum pay out, which is 7,500 coins.

As noted, there’s also a scatter symbol included on the reels, represented by the beautiful mermaid girl. Should three, four or five of these come into view, you’ll receive a total of 10 freespins. All wins during the freespins round will provide you with a triple pay out. Freespins can also be re-triggered.

The treasure chest icon is what provides this game with its bonus symbol and you’ll need to land three, four or five of these on to an active payline in order to trigger the ‘Treasure Bonus’. In this round, you choose objects to reveal random bonus win amounts.