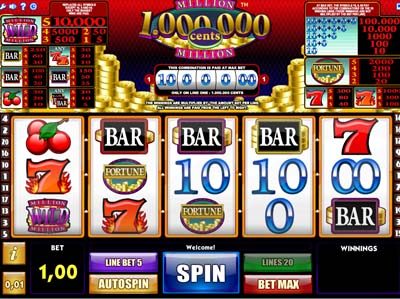 There are quite a few different games available today that merge the best features of traditional slot games with the best of video slot games. Million Cents slot game from iSoftBet is one such game, although it does it with perfect graphics and game play, which does give it a bit of a leg up over many others. This being the case, you’ll find that the reels are filled with a selection of classic slot icons, including cherries, the number 7 and a variation of different BARs. There’s also the addition of an extra standard paying symbol, which reads ‘FORTUNE’ across it.

You’ll also find that the game is presented on five reels and three rows, so it’s a standard interface offering. The slot has also 20 different pay lines to it alongside, and these cannot be customised in any way. You have the opportunity, however, to adjust the value of the bet amount per spin, and this is done simply by pressing on one of the five different amounts displayed at the bottom. These range between £2.00 and £10.

There are a couple of different specialities incorporated into this game as well, starting with the wild symbol. This will act as a stand in for any other symbol on the reels, with the exception of the additional special icons, 10, 0 and 00.

Whenever you play at the maximum bet level of £10, you’ll see that these extra special icons come into play. These symbols will pay according to the combinations displayed on the pay table, and you’re able to win up to a maximum pay out of 10,000 coins from a combination of 10 + 0 +0 + 0 + 00.

Million Cents might not be overly flushed with special features, but for a game that bases itself on a traditional slot offering, it’s appealing enough.