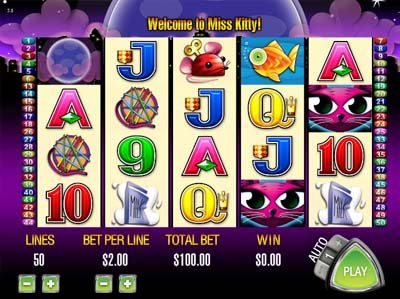 Telling the tale of a cat and its various entertaining toys, Miss Kitty is full of visual appeal, bringing an entertaining and fun game to your screen. It doesn’t have any sort of soundtrack or effects, as is the case with several Aristocrat products, and this can make for a fairly dull game in that respect. However, you’ll still get all the visual pleasure of seeing wind up mice, big-eyed fish, startled birds and spilt milk icons roll across the reels.

Miss Kitty offers up five reels and four rows worth of a layout, whilst also including 50 separate pay lines. These can be reduced and increased to suit your own personal wagering preferences, while the bet you place is also alterable. This can be changed between the minimum of £0.01 and the maximum of £2 per line, allowing players to place a maximum overall wager of £100 per spin.

The moon icon in this game acts as the scatter symbol, and this will appear on reels one, two and three only. Scatter wins are multiplied by the total bet placed. And when three of these appear scattered across the reels, 10 freespins are awarded to you.

The close up of a cat’s face is the game’s wild icon, and this substitutes for all symbols, except scatters. Any wilds appearing during the freespins round will stay in their positions for the remainder of the feature. Furthermore, if any scattered moon icons appear beneath a wild icon, they may contribute to a scatter prize.

This game offers up a sort of fantasy theme merged into a playful, cartoon cat theme. It’s easy to play and has a decent set of extra features included in it. The lack of soundtrack is a little disheartening, but in comparison to a lot of other Aristocrat games, this one is a great improvement.