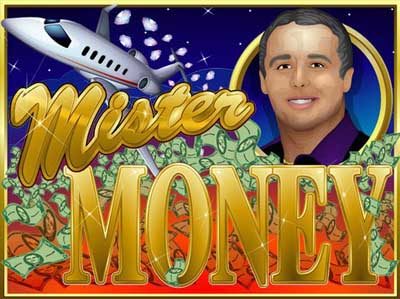 Mister Money is an online slot game by RTG and it is exactly what it sounds like. The main focus of this title is the wealth and luxury in its numerous shapes and forms. There are expensive watches, private jets, gold and jewelry – you name it. A chain of dollar bills lines the top of the reels, but that’s pretty much all we can say about the backdrop here. We can’t say the developers have really paid much attention to the overall design. And the visuals aren’t of the highest quality, even for a dated slot game like this. With that in mind, we should also point out that this RTG offering also lacks a soundtrack. You get to hear the mechanical sound of the reels spinning throughout gameplay and the occasional generic noise that marks winning combinations from time to time. But that just about covers it.

The symbols are a bit more interesting, though. And as we already mentioned, they feature various luxury items and displays of wealth. First are the lower value icons depicting cash, a fancy watch and a gold chain with a $ sign. Next is a gold ring symbol, following which is a bag of money. And after that we have a red sports car, alongside a symbol featuring a small private jet. This brings us to the higher value icons, starting with a fairly large estate. After that we have the two character symbols, the first of which is a blonde woman. And the second one is the male character symbol of Mister Money himself. As far as the layout in Mister Money goes, things are fairly conventional. It has a grid of 5 reels and 3 rows, with a total of 20 paylines. And as is commonly the case with RTG offerings, you can freely regulate the paylines to your liking. Likewise, this affects the betting range, which here is refreshingly flexible and will appease any pocket size. Stakes here start off at only 1c per single spin and reach up to a maximum of $100 per spin.

Although looking rather basic at first, Mister Money does have a very decent offering of special features in store. For one, the Wild symbol that comes in the form of a White Diamond is the most lucrative symbol on the reels. It can potentially reward you with up to 5,000 coins in payouts. More importantly, though, it will be able to land in any position on the reels. And it will also be able to replace any of the other symbols present – even the Scatter! That way it can help boost your winning by creating more winning sequences. What’s more, the Wild symbol will double the payouts for any winning combination it helps complete.

Speaking of the Scatter, though, it also comes in the form of a diamond symbol, only this one is a Red Diamond. And just like the Wild, it can also land in any position, on any of the five reels. It does offer some small scattered payouts, but its main strongpoint is the freespins bonus feature. To trigger it, you will need to land a minimum of 3 Scatters, either left to right or right to left during the same spin. This will award you an initial 5 freespins, but before there begin – you will need to pass through a pick me game.

Note that the number of Scatter symbols that triggered the feature will correspond to the number of picks you get. So, 3, 4 or 5 Scatters will give you 3, 4 or 5 picks, respectively. You will get to choose from a total of 15 different money bags. Each can award you either 3 freespins or an increase to your freespins multiplier. Initially, the freespins come with a 2x multiplier, meaning all freespins winnings will be doubled. But you can increase that value, as well as gain more than just the initial 5 freespins. Furthermore, players will also have the opportunity to retrigger this bonus round. You can do this by landing another 3 or more Scatters. And depending on the number of Scatter symbols you land, you will receive 10, 15 or 25 freespins on top of the ones you have left. The multiplier value will remain the same as the one you had.

Mister Money doesn’t seem as visually appealing as many other RTG online slot games do. That much will be difficult to argue. But it does happen to come with a fairly satisfying special feature. Not to mention that there’s a fun little pick me game to get you started. And on top of that, it’s just multipliers galore in this title. Also, don’t forget that this slot comes with a Progressive Jackpot, which you can win randomly at any point during the game.