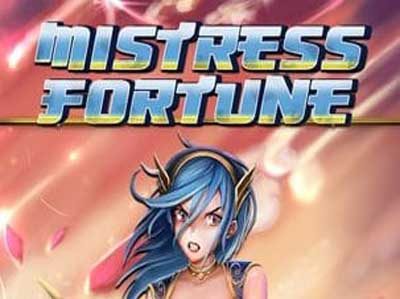 Mistress of Fortune is an Asian themed online slot game by software provider Blueprint Gaming. It offers a strange mixture of flowers and serene music on the one hand, and odd fireballs, battles and dragons – on the other. If you’re a fan of manga and Japanese anime, then you are likely to fall in love with the visuals of this slot right away. They are exactly in this style and graphically speaking, things here are on a pretty high level of quality. However, if this doesn’t quite fit your standards for visual aesthetics, you will still be pleased to know that there’s much more than just anime graphics in store for players. Among them are the especially attractive special features, but more on that in just a bit. 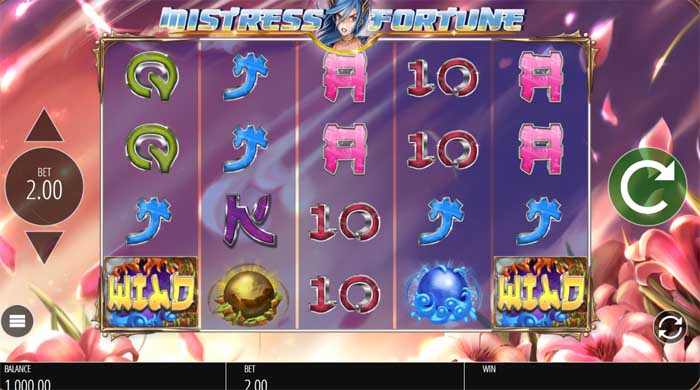 And before we move on to the more exciting parts of this online slot game, let’s first have a look at the game’s symbols. Traditionally, these include the lower value playing card symbols, only you will have a hard time recognizing them here. They’ve been uniquely stylized by the developers, which is a nice touch and adds to the overall feel. The symbols are A, K, Q, J, 10 and 9. Following them, we have four different crystal balls of sorts, each representing an element. First are Earth and Water, they’re both in the same value category. After that there’s the ball representing the element of Air. And last but not least is the most lucrative of the regular symbols – the Fire ball. Another thing that’s worthy of noting about Mistress of Fortune is its layout. It features a slightly larger grid, with 5 reels and 4 rows and a total of 40 available paylines. The paylines here are fixed, though, so you won’t have the opportunity to adjust them. Stakes are somewhat steep, starting at a minimum of 40p per spin. And the maximum amount you will be able to wager per single spin here is £400. Note, however, that the RTP is pretty low at only 94.95%.

The highest value symbol on these reels is the game’s Wild symbol. You can’t miss it – it combines all the four elements and has the word Wild written across it. It can appear in any position on the reels and has the capacity to replace any of the symbols. That way it can help you land more winning combinations. Furthermore, the Wild can also appear in full stacks during gameplay. This means that it could potentially cover an entire reel that it lands on. However, there are two other special symbols that the Wild will not be able to substitute for. One of them is the Bonus symbol that comes in the shape of a red dragon. And the other is the Freespins symbol, depicting the game’s titular character. 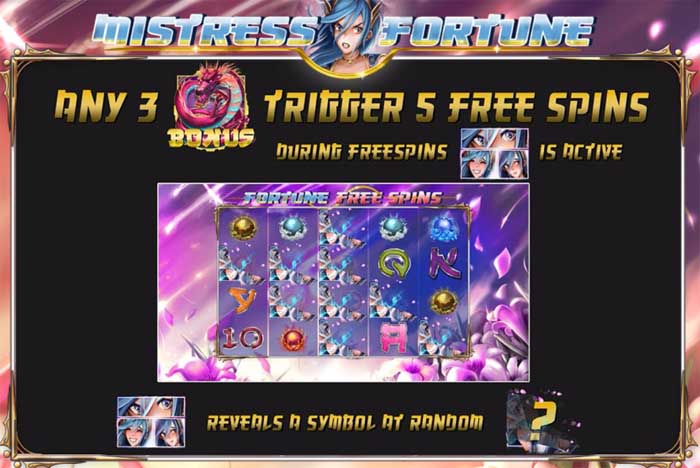 So, the dragon Scatter/ Bonus symbol can appear in any position on the reels. But, unlike the Wild, it doesn’t actually offer any payouts. Instead, it will be able to trigger this online slot game’s main attraction – the freespins bonus feature. But in order for that to happen, you will first need to land at least 3 of these symbols anywhere on the screen during the same spin. This will result in you receiving a total of 5 freespins. And it is during this bonus round that the third and final special symbol comes into play – the Mistress of Fortune symbol. She sort of plays the role of a mystery symbol on these reels, so you will want to watch out for her. She, too, can land in any position on the reels during the freespins. 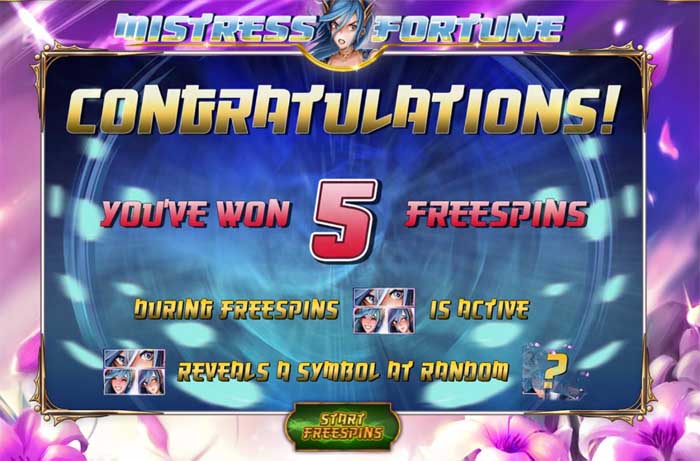 Whenever you happen to land the Mistress of Fortune symbol on the reels, she will reveal another symbol at random. And if there are other symbols like it on the reels, they will all come together to create the same symbol. Thus, you can potentially count on a better winning combination and higher payouts. Furthermore, players also have the chance of retriggering the freespins bonus feature. You can do so just as you triggered it initially from the base game. In other words, you will need to land a minimum of 3 Scatters anywhere in sight. And better yet, you can keep on retriggering it. The limit of total freespins you can get is 225.

Mistress of Fortune will no doubt be a treat for the fans of this genre. The visuals are great, the graphics and symbols are also up to standard and there’s even a matching soundtrack. However, the features here might not be everybody’s cup of tea. There are only 5 freespins, which doesn’t at first come across as very rewarding. But the presence of a mystery symbol and the opportunity of multiple retriggers do kind of make up for it. This slot lands somewhere in the low to medium variance range, so don’t expect overwhelming prizes. But at least you will have a fair chance of getting plenty of freespins action.