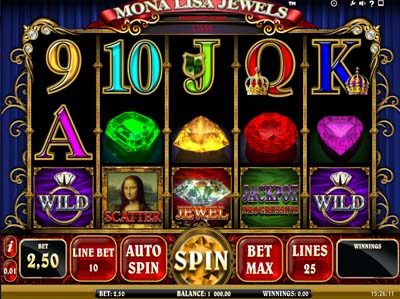 The Mona Lisa is one of the most famous paintings in the world, and it’s actually been incorporated into a few different slot games, including this offering from iSoftBet. Ultimately, it’s not one of the developer’s most exceptional games, but it provides enough of an entertainment factor to make it playable. Upon its reels, you’ll find the often seen A, J, K, Q, 9 and 10 symbols, and these are joined by four different gemstones – a green one, a red one, a yellow one and a purple one. These provide the standard paying icons.

The slot has five reels and three rows, so everything relating to this is as standard as it comes. The developer has also added 25 different pay lines into the game as well, but these can be customised by using the ‘Lines’ box. You’re also able to change around bet per spin, which is done by altering the coin value. This offers up a range of between £0.01 and £0.50, and meanwhile you can change the line bet from one and 10. This allows a maximum bet of £1,000 per spin.

The game has a couple of special features incorporated into it, starting with its wild symbol. This is represented by the diamond ring, and if this shows up, it will substitute for all other icons on the reels to create a winning combination. The only exceptions to this are the scatters and the progressive jackpot icons.

The scatter icon that is included in the game is represented by the Mona Lisa, and when three of these come into view in any location on the reels, you’ll receive a total of 10 freespins. During the freespins, a single wild doubles your winning pay out, two wilds will quadruple it and three wilds provide a pay out of times eight.

There’s also the addition of the shining diamond icon. Two of these symbols showing up on the first reel will trigger two jewel freespins.

Finally, the progressive jackpot that has been included in this game can be won by spinning five ‘Jackpot’ icons onto an active pay line, and you need to be playing at maximum bet level for this.

It’s filled with a selection of special features, but you can’t help but feel that Mona Lisa Jewels is lacking something as well.