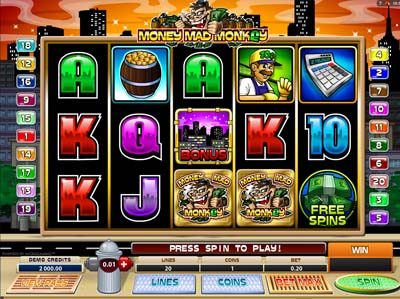 Money Mad Monkey appears to tell the story of a money-hungry ape who has gone rogue on a city at dusk. The primate in question can be seen atop the reels, clutching on to fistfuls of the green paper notes, while the reels of the game itself feature various different icons relating to the overall theme. These include the regularly seen A, J, K, Q and 10 symbols, and these are joined by the city’s primary monkey catcher, a calculator which seems to have amassed a large set of numbers on it, the icon of the game, and a banana. The bizarre sound of tribal drums accompanies your game play every time you spin as well.

This one is played on a five reel and three row interface, while Microgaming have also incorporated a total of 20 different pay lines alongside. These can be adjusted to suit your own personal preferences, and this is done by clicking on the ‘Lines’ button or by clicking on one of the numbers from either side of the reels. Players can also change around the amount of the wager that they place per spin, and this is done initially by altering the value of a single coin between £0.01 and £0.10. You can also switch the amount of coins that you play per round between one and 10, allowing a maximum overall wager of £20 to be played per spin.

This game has a few specialities added to it, starting with the wild symbol, which is represented by the banana. This will act as a stand in for all other icons on the reels, with the exception of scatters, in order to form a winning combination.

The second scatter icon is that of the barrel full of gold coins. You’ll need three, four or five of these to show up in order to trigger the ‘Barrel Bonus’ round. Here, you simply need to click on one of the icons to reveal a prize. And finally, the third scatter is the cityscape image. Three, four or five of these will also need to show up on the reels to trigger the ‘Trail Climb Bonus’. Here, you do battle against the monkey catcher and you need to reach the top of the buildings to win riches.

This casino slot from Microgaming offers up a feature rich game with intriguing graphics and game play.