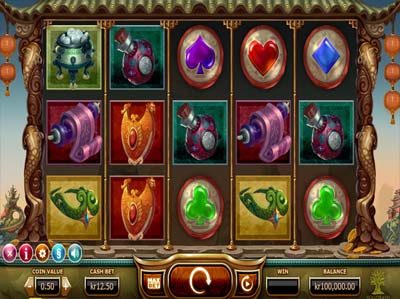 It’s clearly the year of the monkey at Yggdrasil Gaming, as they’ve crafted a superior slot game entitled Monkey King with an oriental theme added to it. This extends right the way across to its soundtrack music, and the game’s symbols are offered up as playing card suits in the first instance – clubs, diamonds, hearts and spades. The remaining six standard icons are provided in the form of a green-coloured tiara, a cork-stoppered red bottle, a golden shield, a scroll, a cauldron filled with coins and a chalice with dragon heads on it.

The game has been designed onto a five reels and three rows, and Yggdrasil have also incorporated a win all ways feature into it, so there isn’t a set amount of pay lines involved. All players also have the opportunity to adjust the amount of the bet value, and this is done by changing the incorporated coin value from its minimum of £0.01 anywhere up to £5, and with this being the case you will be playing a maximum overall wager of £125 per spin.

The specialities of this game start with the monkey king himself, and he can appear and switches a single symbol into a different one to work the game in your advantage.

There’s a treasure chest icon involved in the game as well, and if this shows up in the standard game it will give you up to 1,000 or it will activate the freespins mode. During freespins, the treasure chest will give the aforementioned maximum of 1,000 coins or two extra freespins. This round is triggered by spinning three or more of the freespin symbols into any location.

You’re able to select one of three features to be activated while freespin mode is in play, and these exist in the form of incremental wilds, stacked wilds or starting wilds.

This is definitely one of the more appealing games from Yggdrasil, providing players with a great base theme and high quality graphics alongside. It is a fairly high variance slot machine giving you the possibility og the odd big win. Return to player is a reasonable 96.00%.