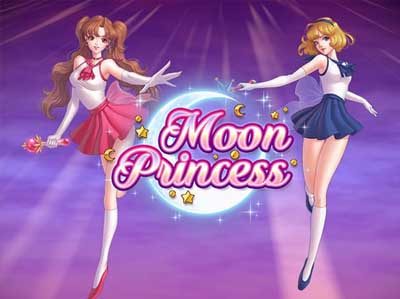 Moon Princess is an online slot produced by slot machine manufacturer Play’n GO. It’s more of a girly-girl kind of theme, unless you are into anime. In that case, you will be sure to like it and there’s an undeniable resemblance of the characters here to those in the popular manga series Sailor Moon. Not to mention that the game title has much to do with that series. But moving on to the slot now, you will notice the setting takes place in midair. There’s a blue backdrop, with the occasional bubble floating up from below. And right beside the reels is who we can only perceive as the moon princess herself. She also appears to be kind of levitating there, holding a magic wand in one hand and pointing it at the reels. Note also the very dynamic soundtrack, which in our humble opinion can be quite overpowering after a while. 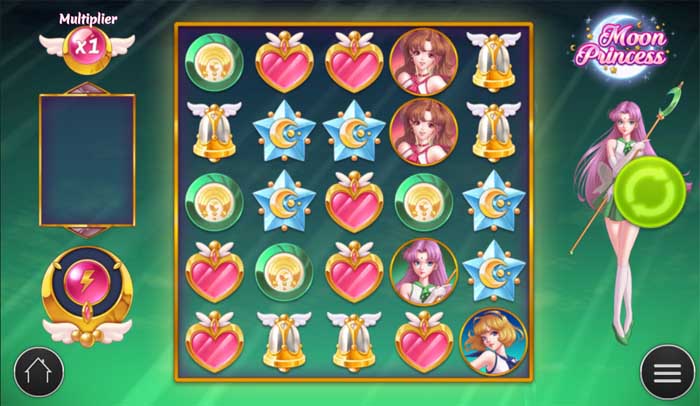 The symbols on these reels start with the lower value green pendant and the blue star. Following them with a slight increase in value, we have the heart shaped pendant, and a golden bell with wings. And this brings over to the higher paying icons in this online slot game – the character symbols. There are three of them in total, all of the same value. But you can also make mixed combinations with any of them for lesser payouts. Each of them also has a name and they are Storm, Star and Love. As for the game’s layout, this certainly isn’t what you see every day. The grid includes 5 reels and 5 rows, much like you see in games like Candy Crush. The stakes here are reasonable and range from 20p per spin up to the maximum total of £100 per single spin. And the Return To Player percentage is also fairly decent at an long term average of 96.50%.

The first thing we should immediately put out there about Moon Princess is the fact that you can win multiple times during the same spin. What we mean by that is that once you’ve landed a winning combination, the symbols in that combination will disappear. So those on top of them can fall in their place. But note that no new symbols will be falling onto the reels from above. You will just basically be dealing with the ones you landed initially. But there’s one more bonus here. With each winning combination that you form, the middle symbol will become a Wild. And on top of that – you will also increase the win multiplier! Potentially, that value can reach up to 20 times your stake. Now, the Wild symbol on these reels is also the most lucrative symbol here. It pictures a moon and can be worth up to 50 times your bet amount. But more importantly, it will replace any of the other symbols in the game to help form winning sequences.

Moon Princess has two different free spins features. The Princess Trinity free round feature, and the regular free spins bonus feature. On the left hand side of the slot machine you will notice a bonus meter that consist of three sections that can be filled up when you get winning combinations with any of the princesses. If you manage to fill up this meter in a game round, you will trigger the Trinity Free Round. In the trinity free round each of the princesses will use their special skill one time. It is in this feature that you stand the biggest chance to clear the board and thus triggering the free spins bonus feature that we will talk more about in the next section. 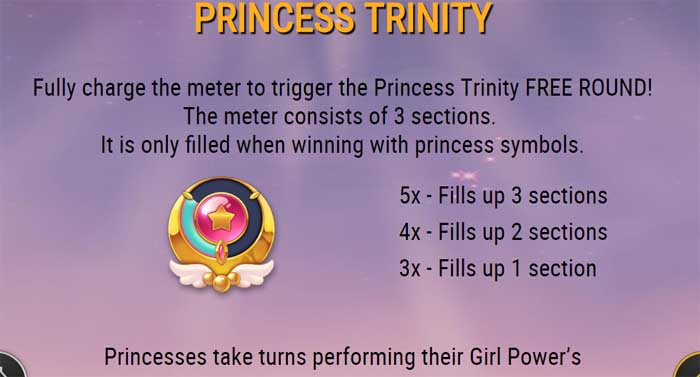 And in addition to all this, Moon Princess also has its very own freespins bonus feature! Triggering it will be quite tricky, though, but it will turn out to be all the more rewarding. In order to activate the freespins bonus, you will need to completely clear the grid of any symbols, as mentioned, this is easiest done in the Trinity Free Round feature. As a result, you will then get to choose the mode in which you would like to play the freespins.

There are three different modes – one for each character. And every time you don’t win anything on a spin, that character will grant you her Girl Power feature. For example, Storm will destroy two sets of any symbol, whereas Star can award you up to 2 Wilds anywhere on the reels. And Love will transform one set of symbols into another symbol. These features can also occur randomly during the base game, depending on which of the three characters is active. Note also that during the freespins round, the multiplier meter will not be reset between spins. This means that it will just continue on growing as the feature progresses and you can score some pretty massive prizes. The multiplier will stop on a maximum of 20x, and so will the amount of free spins you can receive. 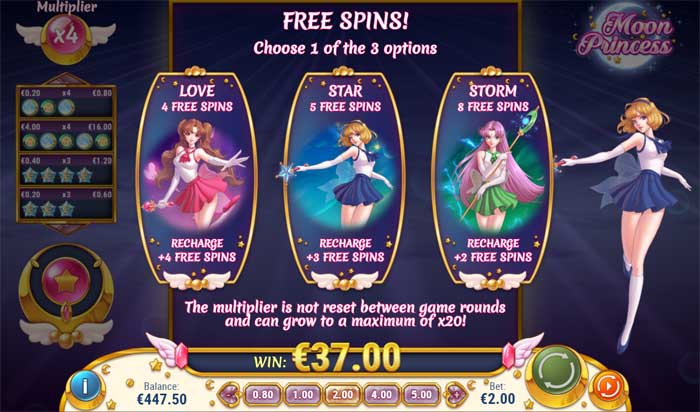 Moon Princess is a really cool game that may seem a little complex in the beginning. And it’s true that there are a number of features in store here, but once you start spinning the reels – you will be sure to get the hang of it. And those features are also what make the slot so attractive. That, together with the game’s rather dangerously high volatility. Be sure to watch out for your bankroll on this one, as the major wins won’t be easy to get a hold of. But once you do, they will be very much worth your while.

This slot is a bit different than your ordinary slot machine, but that is why we like it so much. It is innovative, and the bonus feature is really exiting, with the big payout potential as an extra incentive. Once you get a hang of how to play it, you are going to love it, at least we do.