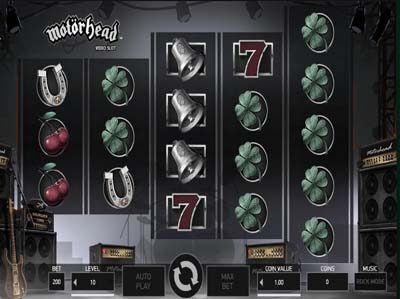 Much as you would guess, the Motörhead slot by NetEnt is an homage to the eponymous band. Still, whether you’re a fan of this band or not, whether you headbang or not, this slot is loads of fun. Moreover, true to the spirit of metal, it’s loud, so set your speakers accordingly. As to the choice of music… well, you can guess it. The graphics are more than adequate – it’s set on a live stage (well, an approximation), and the reels are surrounded by speakers, amps and instruments.

It’s playable across multiple platforms – desktops, mobile phones, tablets, you name it. In the briefest of terms, this is a 5-reel slot with 76 paylines. The first and second reel have three levels, third and fourth four, while the fifth reel (to the extreme right from the player’s perspective) has five levels, which is not as unique as one might expect, but it does help the slot stand out.

The coin range is set so that the least you’ll be able to bet is 20p, while two hundred quid is the max. The basegame is nothing to write home about (still, payout is decent), but there are three bonus rounds to spice up things.

Special Features
There are seven basic symbols, plus the two special ones, wild and scatter. These are: Lemmy, a gold star, a silver bell, a horseshoe, a four-leaf clover, a red seven and a couple of cherries, i. e. an Ace of Spades logo and a Motörhead logo, respectively. As expected, the wild symbol is able to substitute for any other symbol, except scatter.

By far the most interesting feature would have to be the Mystery Reel. What this does is, in essence, is wait until the reels stop spinning and transform any and all mystery symbols to help out with the odds. This applies to all symbols except scatter, and it’s active throughout your play, both in basegame and during freespins. This can happen on any spin in the basegame and freespins, and can encompass one or more reels, completely at random.

Speaking of freespins, the round that has them is triggered by landing three Motörhead logos anywhere on reels three, four and five. You get ten freespins, which cannot be retriggered, which is a major drawback of this feature. However, on the upside, the Mystery Reel on freespins can include both wilds and Mystery symbols, which can add up to a massive win in the end.

Finally, the third bonus round is the Bomber feature. It is completely random and can happen on any spin during basegame. At any given spin, you may see bombs exploding all over the reels; this results in creating said mystery symbols. Mind you, this occurs before the spin takes place. It is somewhat similar to the Mystery Reel, in the sense that it gives you up to 15 mystery symbols which can and will transform into another matching symbol to help you out with the wins.

Summary
When all is said and done, Motörhead is certainly an interesting slot (great soundtrack, decent graphics, interesting features), with potential for massive prizes.