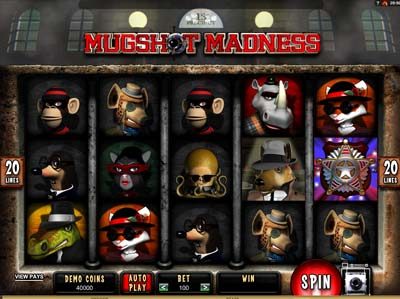 It may sound fairly obvious as to the type of theme that runs through the Mugshot Madness slot game. And while you might have the basics on point, it holds so much more. You see, it’s actually all set out in the animal world. That’s right, the criminal life of animals! This means that while you can see mugshots on the reels, they’re all of animals. It actually is madness! The symbols on the reels begin with six different animals in disguise. There’s the octopus wearing sunglasses, the dog with a blonde wig on and the monkey in red and black stripes. Furthermore, a mole is wearing round glasses, an anteater has a monocle and hat, while a cat has gone all masquerade. Joining them are four further symbols. These are of a turkey looking like a judge and a rhino wearing a mini hat. A fox in posh lady’s clothing is next as well as a crocodile looking like a detective.

Everything has been put onto a five reel and three row interface and features rich graphics. There are 20 bet lines in the game alongside. Switching these around is not possible. However, you do have the option of adjusting the stake that you place per spin. This is done by changing your coin size between £0.01 and £0.50. Meanwhile, the amount of coins in play per line is changeable between one and 10. This allows a maximum overall wager of £200 per spin.

Mugshot Madness is quite awash with specialities, ensuring that it’s an entertaining offering. The first of its offerings is ‘The Line-Up Feature’. It’s the sheriff’s badge that acts as the trigger for this. You need to spin three, four or five of these into view in order to trigger it. It gives you either 15, 20 or 25 freespins respectively. During this round, if the criminal icons are part of a winning combination, they are caught. Each criminal can only be caught once. Furthermore, each of them provides a multiplier of your total triggering bet once once caught.

The sheriff’s badge also works as a standard scatter icon alongside. This means that it will multiply the stake that you have in play. If you spin five into view, you will receive a maximum pay out of 20,000 coins.

There is the addition of a wild icon as well. This is the detective dog, also known as Detective Jack Murphy. As a wild, this stands in for all other symbols except for the scatter. When it does, it will provide a win which it multiplies by two times.

As a Microgaming game, we really can’t fault this one. It offers a great slot option with high quality graphics and gameplay. Not only that, but its specialities are exceptionally intriguing as well.