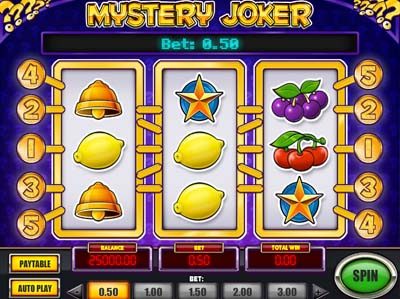 If you’re a fan of the traditional slot games on the market, then you need look no further than Play’n Go’s Mystery Joker offering. This one merges the classic icons and design of a traditional slot machine with the up-to-date graphics and game play of a modern video slot, thereby offering up a game which will cater to fans of both genres. The icons utilised on the reels exist in the form of cherries, lemons, grapes, bells and gold stars, which is where the influence from machines of days gone by comes from.

The game itself is played on a standard classic machine layout of three reels and three rows, and the developer has included a total of five different pay lines into it as well, and these are not able to be customised. However, players do have the chance to change around the wager that they place per spin, and this is done by using the values displayed at the bottom of your screen. A range of between £0.50 and £100 is able to be chosen from, while an ‘Auto Play’ button allows you to spin the reels up to 50 consecutive times at the same bet level.

Those gamers who are familiar with traditional slot machines, will know that they generally don’t provide many, if any, special features. However, in Mystery Joker there are a couple of extra additions to the reels to ensure that your game play is more entertaining. This starts with the scatter symbol, which is represented by the jester’s hat. If you manage to spin three of these into any location on the reels, you’ll trigger 10 freespins, and these can be re-triggered up to a maximum number of 50 freespins.

Furthermore, during the freespins round, if you spin two or more of the scatter icons, you’ll receive a mystery win pay out of anywhere between one and 100 coins.

We love the simplicity, but yet modern design of this offering from Play’n Go. It has round upon round of intriguing game play and the possibility of winning mystery wins gives it an extra perk on top.