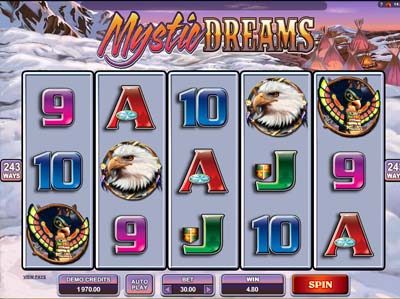 Mystic Dreams takes you right into the heart of a native American tribe. You’ll live in a tepee amongst the snow-covered mountains. Joining your spins, you’ll hear the sounds of some mystical music, furthering the atmosphere of such. Upon the reels of the game, you’ll see various different icons. These start with the often seen standard slot symbols. In addition to this, there are four other symbols. The first three are of animals – a bald eagle, a wolf and a bison. The last symbols is that of a native American in full Indian headdress.

Playing the game will present you with five reels and three rows. There are also 243 different ways to win in it as well. This is not something that you’re able to change. You have the option of altering your wager though. This is done by changing the coin size between £0.01 and £0.20. You can also alter the amount of coins that are in play between one and five. There’s also an ‘Auto Play’ button, allowing you to spin the reels several consecutive times at the same wager level.

Playing the game will also allow you to access some interesting specialities alongside. These specials include the game’s wild icon. This is the image of the tepee with a dream-catcher surrounding it. The wild substitutes for all other icons. The only exception to this rule is the scatter.

And as far as the scatter goes, this is the totem pole icon. These symbols pay out wherever they show up, with five of them offering a maximum pay out of 1,500 coins. If you spin three, four or five of them into view from left to right, you’ll receive 10, 15 or 20 freespins. And not only that, but the scatter appearing on reels two, three and four have multipliers of times two, three and four respectively. You can therefore have a maximum multiplier of times 24 in play.

Mystic Dreams is a very nice offering as far as graphics and general gameplay go. It has an intriguing base theme throughout, but its specialities aren’t anything overwhelming. On the whole, it’s a nice addition to the Microgaming catalogue, but gets lost in the shuffle.