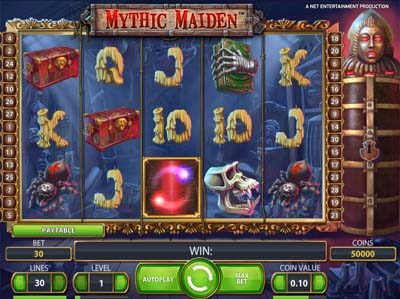 If you’re into the creepy games, you’ll certainly enjoy playing the Netent slot game entitled Mythic Maiden. It’s filled with mystery and intrigue, and appears to take place in an abandoned crypt or attic. It tells the tale of the iron maiden coffin, which can be seen on the right hand side of the reels. Upon these reels, you’ll also find the various different icons, with the A, J, K, Q and 10 symbols being presented in the form of wax candles. There’s also other symbols in the shape of a big, red trunk, a black window spider, a green book held together by a lock in the shape of clasped hands, an odd-shaped skull, and a shrunken head.

The interface of the game is presented in the form of five reels and three rows, which is a fairly regular layout for online video slots. A total of 30 pay lines have been included in the game as well, and these can be customised by using the buttons on either side of the ‘Lines’ box. Furthermore, players can alter the amount of the wager they place per round, and this is done firstly by changing the coin value between £0.01 and £0.50 per line. The bet level, on the other hand, can be adjusted between one and 10, and if you push these both to their highest levels, you will be placing a maximum overall wager of £150.

There’s a wild symbol included in Mythic Maiden, and this is represented by the moon. Wilds will substitute for all other icons on the reels, except for scatter symbols, and all bet line wins which include this icon will pay out triple the amount.

Accompanying this icon is the scatter symbol, and this is represented by the circling red and blue light balls. Three or more of these appearing in any location across the reels in the main game activates the freespins round. A total of 10 freespins will be given for three scatters, 15 freespins from four scatters, and 30 freespins are given for five scatters. Additional freespins can be won during this round as well, by spinning further scatter icons. Furthermore, during the freespins round, the iron maiden is opened up, and this can reveal a multiplier of up to 10 times, as well as additional freespins of up to two times after each spin.

This game presents a wonderful and intriguing product to play with a strong theme incorporated in to it and interesting special features.