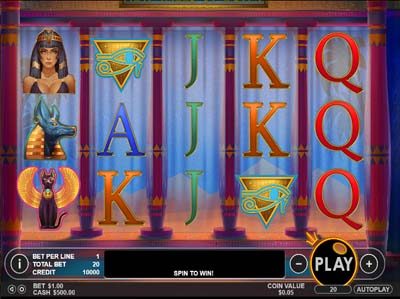 The theme of Egypt is arguably one of the most popular and overused themes in the world of online gambling. Pragmatic Play has presented us with yet another game centering on ancient deities and pyramids – New Tales of Egypt. The graphics aren’t quite baffling, but we can at least give credit to the impressive backdrop. It features two lushly decorated female statues on each side of the reels. As for the reels themselves, they picture the regular lower value playing card symbols. Ace, King, Queen, Jack and 10 all appear in different colors. Following them are the all-seeing Eye of Horus, Bastet, Anubis and what we can only assume is Queen Cleopatra herself. The soundtrack, however, doesn’t quite do the theme justice and is a bit of an odd decision, in our opinion.

The game has a standard layout of 5 reels and 3 rows, with a total of 20 paylines. Though players will not have the option of regulating them, they can freely adjust the bet per line and coin value. Betting ranges start with 20p per spin and go up to £100 per spin. The RTP, however, is unexpectedly low at 91.93%.

The game’s Wild symbol is the stunningly bright and shining diamond. It whirls around to let you admire the way it catches the light. It is also the highest paying symbol on the reels, offering payouts of up to 1,000 coins. And as any Wild should, it can replace all of the regular symbols to contribute to winning combinations. The only symbol it cannot replace is the Scatter, which comes in the form of the Great Pyramid.

In addition to being a Scatter, the Great Pyramid also acts as a Wild, thus it can substitute for all other symbols on the reels. However, you will be looking to land at least 3 Scatter symbols at a time. This will activate the Queen’s Chambers bonus feature. This is a freespins feature, but with a little extra to it. Before the round starts, the game will randomly choose one of the higher value symbols to become a Scatter. After this you will receive 10 freespins, during which you win with the new Scatter anywhere on the reels.

And what’s more, you can also retrigger this bonus feature for additional spins! You will be looking to land at least another 3 Great Pyramid symbols at a time. This way you will receive another 10 freespins, for a total of 20 freespins.

New Tales of Egypt is a rather interesting slot that has potential for relatively high payouts. However, the RTP is rather low and the freespins feature doesn’t occur as often as one might hope for.