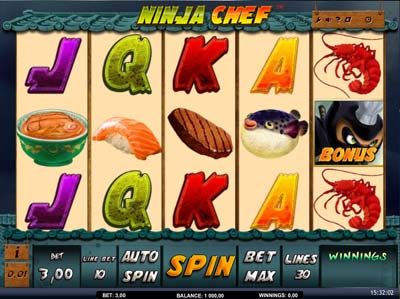 Ninja Chef takes you on a culinary journey, allowing you to spin reels that are filled with food! Of course, you’ll need to have your best cook’s skills in focus to precisely slice through those pieces of fish and meat. Don’t worry though, because iSoftBet will also provide you with a couple of special features in this one to assist you with doing so. The symbols that have been added to the reels start with the regularly seen A, J, K and Q icons, but they’re joined by five other standard paying symbols as well. These exist in the form of a crayfish, a bowl of soup, a partially made piece of sushi, a piece of beef and a puffer fish.

Not only that, but there’s a total of five reels and three rows provided as part of this game’s layout. A total of 30 different pay lines have also been added to Ninja Chef as well, and these can be customised to suit your own personal preferences by using the ‘Lines’ box. You can also adjust the amount of the wager that you place per spin, which is done first of all by altering the value of a single coin between £0.01 and £1. Meanwhile, the line bet is changeable between one and 10, allowing a maximum overall wager of £300 per spin to be played.

As noted, iSoftBet has added one or two special features into the game to assist you in claiming those big pay outs. The first of these is the bonus round, which is triggered when three icons of the chef in question appear anywhere on the reels. This presents you with a freespins round and you can earn an extra five to 15 freespins during this round as well. Furthermore, the freespins also includes a wild reel extender, and this sees the wild reel replace any symbol, except for scatters, bonus and multiplier wilds, in order to form a win.

And speaking of the multiplier wilds, these are fairly self-explanatory, appearing with a multiplier amount on them. Times five and times three can only show on the middle reel, times two on reels two and four, and times one on reels one and five. All of them will substitute for other icons to form a win, except for scatters and bonus icons.

Finally, the aforementioned scatter icons are represented by the game’s own logo, and they will pay out in any location they show up in.

Ninja Chef is a very whimsical game to play, and it has both stellar graphics and intriguing game play alongside.