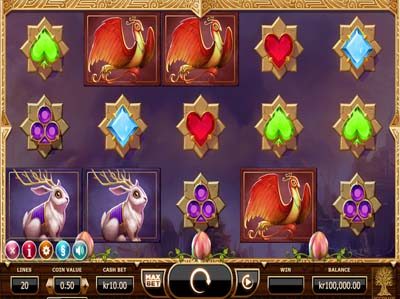 Nirvana will certainly provide you with a wonderfully serene and yet still exciting slot game, thanks to its completely appropriate soundtrack and high quality graphics, both of which are attributed to slot developer Yggdrasil Gaming. As such, you’ll be presented with icons which, in the first instance, relate to the suits of playing cards. These are joined by four icons of mythological-looking creatures, starting with a cat with an eagle’s head and moving on to a rabbit with antlers, a snake with an underwater creature’s face and a peacock head on a phoenix body.

As far as the interface of the game itself is concerned, the game is played on five reels and three rows. There are also 20 pay lines incorporated into Nirvana as well. You have the option of adjusting the value of a single coin between £0.01 and £5.00, and pushing this up to its highest level will provide a maximum wager level of £100.

The developer has added a few different special features into the game, starting with a wild symbol, and this will substitute for all other slot symbols, with the exception of freespin icons.

The features exist in the form of Wild Seeds, which creates between two and four wilds on random positions, Mega Reels, which ensures that the three middle reels all have the same symbols, and Nudge Reels, which pushes a reel up or down for the best possible outcome.

Nirvana is full of modern day charm and offers up a mythological look back into history at the same time. It’s filled with high quality graphics and gives you an entertaining round of game play in the process.