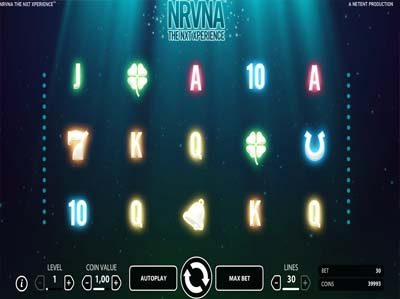 NRVNA certainly does provide you with the ultimate next experience. Provided by Netent, it takes on a sci-fi like theme, similar to other games from this developer such as Starburst and Sparks. It features a very futuristic and electronic-influenced piece of music behind it as well, making game play even more appealing.

Everything is provided on a standard layout of five reels and three rows, and Netent have also incorporated a total of 30 pay lines alongside. You do have the chance to customise these pay lines, and you can also adjust the bet per spin. This starts with the possibility of altering your coin value between £0.01 and £0.50, and change the bet level from one to 10. This brings a maximum bet value of £150 per spin.

The developer has included a couple of different special features into NRVNA, and this begins with the wild icon. Wilds will stand in for any of the other symbols, except the scatters, in order to form a win. All bet line wins that include wild symbols will provide pay outs of times three.

And as far as the scatter symbol is concerned, this is represented by the diamond inside an orange bubble. Three or more of these appearing on the reels in any location will activate the game’s freespins round. You’ll be given 10 freespins for three scatters, 15 freespins for four, and 30 freespins if you manage to spin five scatter icons into view. During any freespin round, the NRVNA Wheel randomly shows a multiplier of up to 10 times and/or additional freespins of up to plus two.

We definitely think that all gamers will be able to appreciate the experience of playing this game. It’s got the same kind of simplicity as Starburst, but doesn’t lose out on any thrilling game play.