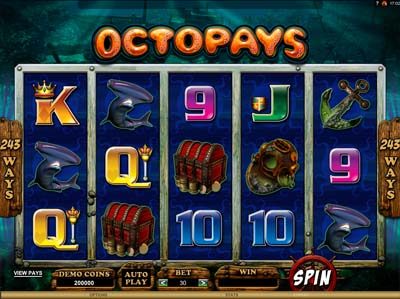 You’ll be taking a dip under the deep blue ocean in the Octopays slot game from Microgaming. This one is filled with all the marine undergrowth and wreckages where you can find your buried treasure, and that’s just the background! On the reels, you’ll find various different forms of sea life, such as the hammerhead shark and, of course, the octopus itself, which is coloured orange. These are joined by symbols of a huge anchor, a diver’s sunken steel helmet and a red treasure chest filled with golden coins. There’s also a sort of wonderland soundtrack to accompany your game play in this one as well.

It’s played on a five reel and three row layout, so it’s fairly stand in that respect. However, Microgaming have also incorporated a total of 243 ways to win alongside, and this is something that cannot be customised in any way. You can, however, change around the amount of the wager you place per spin, and this is done simply by using the arrow buttons on either side of the ‘Bet’ box. Here, you’ll find a range of between 30 coins and 300 coins per spin.

Perhaps the most intriguing of this game’s special features is its ‘Kraken Feature’, and this is triggered when the octopus icon lands on reels two and four in any location. Once this happens, you’ll be provided with 12 freespins of the reels, and at the start of each of your freespins, up to four of the octopus icons can be placed in random locations by the kraken, except for the third reel.

The octopus icon, in both the main game and freespins, acts as the wild symbol. This means that it will stand in for any other symbol on the reels in order to form a winning combination, with the only exception being the inked kraken.

Finally, during the formerly mentioned feature round, inked krakens will appear on reel three only, and these work as an extra wild, substituting for all other icons, with the only exception being the orange octopus standard wild. Wins containing the inked kraken are doubled.

We actually really enjoy playing Octopays. It has some very funky and fun imagery incorporated into it, and not only that, but it’s special features are pretty entertaining on the whole as well.