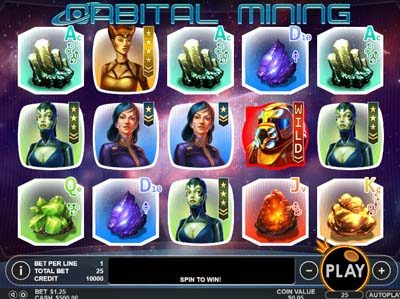 Orbital Mining is a futuristic slot game by software provider Pragmatic Play. Right from the start, the slot will greet you with a very strong electronic soundtrack that perfectly fits the theme and enhances it even. The backdrop features the starry universe, obviously seen from behind the windshield of some spacecraft. And since the theme isn’t just any kind of cosmic one, but has the word ‘mining’ in it, you will be seeing plenty of intergalactic elements and minerals on the reels. For ease of differentiation, each of them has a playing card symbol on it: A, K, Q, J and D. The higher value symbols feature a number of different female space agents. You can tell their rank by the number of stars they have. What appears to be a robot with laser eyes is the game’s highest paying symbol.

The layout features 5 reels and 3 rows with a total of 25 paylines. What’s remarkable about the reels, though, is that they don’t spin. They just appear. Players can enjoy a rather flexible betting range of between 25p and £125 per spin and a RTP of 96.64%.

The Wild symbol in Orbital Mining is yet another seemingly robotic character, only a more intimidating one. It can replace any of the regular symbols on the reels to help create winning sequences. As is custom, it cannot do that for the game’s Scatter symbol.

The Scatter, in turn, comes in the shape of an atom and, thus, bears the title of an Atomic Scatter. It can appear anywhere on the reels and is responsible for activating this game’s single bonus round – the Smuggles Goods Scan bonus feature. To trigger the bonus, you will need to land a minimum of 3 Atomic Scatters anywhere on the reels. Once this happens, you will need to scan two planets, crafts or moons on the screen to receive your reward.

In addition, this slot also showcases a Gamble feature to help players increase their wins. Each time you spin a winning combination, you will have the opportunity of doubling or losing it in a side game. It’s a simple principle: guess the correct color of the card and your amount doubles. Guess incorrectly – you lose it.

Orbital Mining offers a very unique atmosphere, with entertainingly pleasant features. The graphics are up to standard, as is the soundtrack. Though there is only one bonus feature, it can land you some great wins. However, actually reaching the bonus round is another question, as it doesn’t occur often, to say the least.