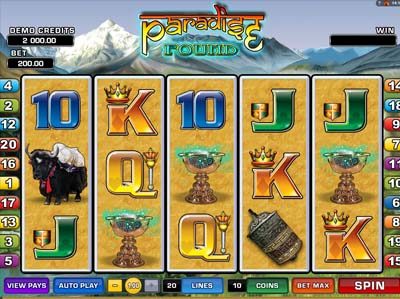 Have you ever dreamt of finding paradise? Well, perhaps playing the Paradise Found game from Microgaming will bring it to you. Taking you in to the heart of Nepal’s mountain peaks, this one will have you at one with nature. It presents you with reels which feature the regularly seen K, Q, J and 10 icons. Joining them are three additional standard symbols. These exist in the form of a golden chalice first of all. Secondly, there’s an incense burner top and, finally, an ornate yak. It’s unfortunate that it has such an arcade-sounding piece of music in it.

The overall design of the game features five reels and three rows. Microgaming has also made sure to add a total of 20 different pay lines into it. You do have the chance to change these around with the ‘Lines’ button. You also have the ability to adjust your wager per spin as well, and this begins with the value of a single coin. This offers up a range of between £0.01 and £2 per line. You’re also able to change the amount of coins in play per line as well. This has a range of between one and 10. Therefore, a maximum overall wager of £400.

Many people consider Nepal to be a special and almost spiritual place. Therefore, it should feature some specialities of its own. The first of its special features is its wild icon. This is the image of the lotus flower. As a wild, it substitutes for other symbols on the reels in order to form a winning combination. However, if one appears on the first reel and the image of the palace on the fifth reel, the Wild Lotus Feature becomes active. During this feature, all the reels are held in place. A single symbol position on reels two, three or four will randomly turn into a wild and award a prize.

Secondly and finally, the scatter icon is that of the intrepid explorer. As a scatter, this provides a pay out wherever it shows up on the reels. Should five of them come into view, they will reward you with a maximum pay out of 20,000 coins.

It’s nothing special in terms of its additional features, but everything merges together nicely. It forms a wonderful offering to the Microgaming catalogue.