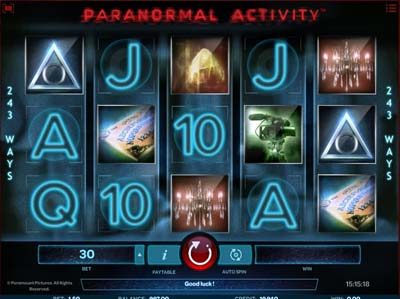 Based on the popular (though, fairly speaking, fairly sub-par) film franchise, Paranormal Activity by iSoftbet definitely manages to capture the original atmosphere, even surpassing its inspiration. This, of course, means that it relies on cheap shock value horror, annoying loud sounds and white noise. Still, graphically speaking, the game is great, and animations that activate after winning combos even include some “found footage” style clips.

Looking at it from a punter’s point of view, we find this is a slot with 5 reels, 3 rows and 243 paylines that count from left to right. The game will great you with a message stating you can win up to 120,000 coins, which might make up for the soundtrack. Speaking of coins, their value varies from 30p to ₤1, and the max you can bet per spin is 30 (see a pattern already?). There are four bonus rounds / special features, which we’ll discuss shortly. 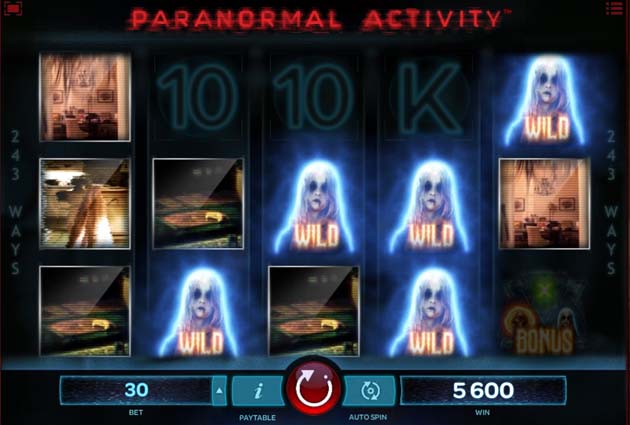 As noted earlier, the symbols are definitely in line with the theme. Of course, you have the basic cards from tens to aces as the low paying symbols, and five high paying ones. In addition to these, there are also three special symbols – a girl (the wild), a hand (the scatter) and a bonus symbol.

There are four bonus rounds in total, three of which are triggered by a certain combo, while the remaining one is completely random. The three rounds mentioned are activated by the Bonus wheel, which is in turn triggered if you land three bonus symbols on reels one, three and five. This will award you one of three freespin rounds or an instant win. The former will be explained in some detail bellow. The latter implies multiplying amounts by the coin value that is used when the bonus wheel is triggered.

One of the three freespin rounds is called Paranormal freespins, and it awards you unlimited freespins until you land five hits, with increasing multipliers. The multipliers start with 1x value, then move on incrementally to 2x, 3x, 4x and 5x.

Another freespin round is Possessed freespins, which awards you 10 freespins with extra stacked wilds that are intended to boost the winnings. The stacked wilds will take the form of the possessed girl, and will take up the whole reel where they appear.

The third and last freespin round is named Demon freespins, and it awards you 15 freespins with the random demon symbol that’s supposed to add extra wilds. During this round, the demon symbol will act as the wild, turning other symbols into wilds, as well.

We’ve also made mention of a fourth bonus round, which is not triggered by scatters. This is the Paranormal event feature, and it occurs randomly at the start of any spin during the base game. What it does is generate up to 5 extra wilds anywhere on the reels and lock them in place for that spin, significantly improving chances of landing a hit. 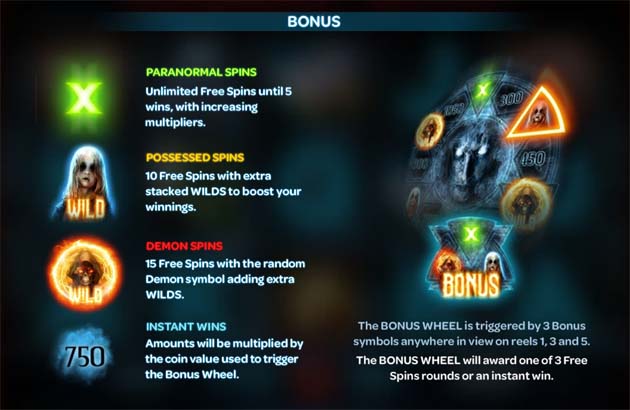 Depends if we’re talking about the film or the slot – the former decidedly no, but the latter has a chance. On a more serious note, SoftBet’s Paranormal Activity is definitely a fun slot to play, with a decent RTP (96.75%). Still, for a medium-high variance slot, it’s quite packed with features, and potentially highly lucrative, provided you have the patience to play through the soundtrack. One of the best (and scariest) slots of 2016 in our opinion and definitely worthy of a spin.