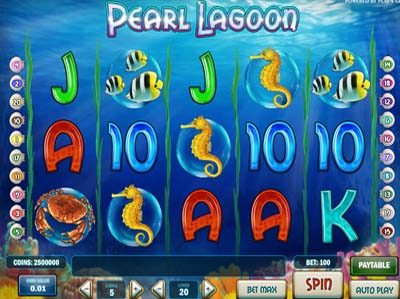 Take a dip into the deep blue sea with the Pearl Lagoon offering from Play’n Go, and see if you can find your own buried treasure. The interface of this one is presented with shimmering waves across the top as well as vast coral spread out across the bottom. With this being an underwater-themed game, you’ll be presented with some marine life icons, although the initial lower paying symbols exist in the form of A, J, K, Q and 10. Joining these are five other symbols, and these are present in the form of three swimming fish, a single angelfish, a seahorse, a crab and a turtle.

You’ll find that there’s a total of five different reels incorporated into the game and three rows have been added as well. Play’n Go have also included 20 bet lines into the game, but these can be customised to suit your own personal preferences. You’re also able to alter the amount of your wager placed per spin, and this is done first of all by changing the value of a single coin between its minimum of £0.01 and its maximum of £0.25. Meanwhile, you can also alter the amount of coins wagered per line between one and five, and this allows a maximum overall bet of £25 to be played per round.

While you’re diving through the deep seas, make sure to stop and check out the special features that Pearl Lagoon have to offer. This begins, first of all, with the wild icon, which is represented by the dolphin. This substitutes for all other icons on the reels in order to form a win, except for the scatter symbol. It will also double the pay out you receive, and five of them on a pay line rewards you with 5,000 coins.

There’s also the icon of an oyster with a pearl in it, and this is the game’s scatter symbol. If you spin three or more of these on to the reels, you’ll trigger the freespins round. You’ll have 15 freespins of them and there’s a multiplier of times three involved in the round as well.

The Pearl Lagoon game is definitely an intriguing offering from this developer, and even though its special features are a fairly standard affair, it’s still appealing enough to provide an all around welcoming game.