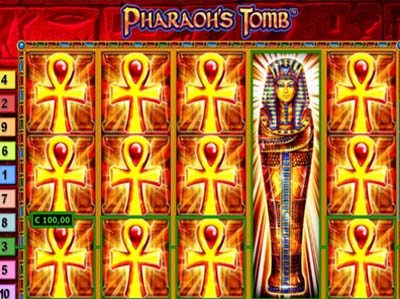 Riches and adventure await in the oddest of places. Exactly – the internet. On a more serious note, Pharaoh’s Tomb from Novomatic is certainly an interesting slot, not only because of the theme and atmosphere it helps bring about, but also because it can prove more lucrative than you might expect.

This is, hands down, one of our favourite slots. The basegame is fairly standard, but the real fun begins once you hit the bonus round. Not only do you get a potential 500x max hit, but you can hit it multiple times in the same bonus round, if the Pharaoh’s feeling inclined to favour you. To make long story short, this is a basic 5-reel, 10-payline slot, with coin sizes varying from £0.01 to £5.00. So, while you can theoretically cover all of the lines for mere £0.10, you can also bet an impressive amount of £50 max.

Special Features
There are the usual high value card symbols as standards, along with some nicely executed hieroglyphs and Egyptian symbols for an ancient-y feel – a pair of reed leaves, a falcon, a scarab, a double water ripple, and a cobra. On top of these, there are three special symbols – a Pharaoh’s mask (wild), an Ankh (highest value standard symbol) and the Pharaoh’s Tomb logo (scatter). If you manage to land five Ankhs (Egyptian cross, symbolizes eternal life), you can win the standard top prize which amounts to 2500 coins.
Regarding the pharaoh’s mask, this is, in essence, not unlike any other wild symbol you may have seen so far. It substitutes any other icon, save for scatter. But, there’s more. This is an expanding wild, meaning that when it appears on a real, it expands to encompass the whole reel, top to bottom. There’s even a nice animation that turns the pharaoh’s mask into a sarcophagus, releasing the most valuable symbols – reed leaves, water ripple, cobra, falcon and Ankh. The lowest-worth symbols are removed and replaced by the next highest.

To trigger freespins, you need at least three scatter symbols anywhere on the reels. But, wait! There’s more! For each wild combo you land on reels two, three or four, you’ll get +1 freespin; if there are two wilds, you get +3 freespins; for the max 3 wilds, you’ll be awarded +5 freespins. Most importantly, there’s a chance to retrigger freespins while in bonus round.

Summary
If the only plus side of playing Pharaoh’s Tomb is that you took interest in Ancient Egypt, then you’ve already won. Still, it’s hard to neglect the possibility of actually winning some money. We’ll repeat, although the base game is pretty ordinary, and the max payout is a “mere” 500x, the chance to win it multiple times during the bonus round makes it quite appealing, and certainly one of our favourite slots.