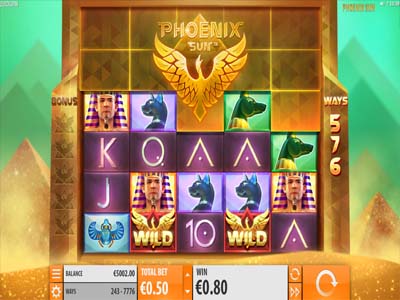 Phoenix Sun is a really grand, even majestic Quickspin game. It offers some really nice graphics and a compelling atmosphere, alongside fairly unique and intriguing features. This slot takes you to the faraway place and time of Ancient Egypt, when people worshipped half-human, half-animal deities and pharaohs reigned. We’ve seen a number of different takes on this theme from different providers, but this one is the most outstanding. The symbols look highly sophisticated, as does the background. We really like the soundtrack and the gameplay is also very entertaining and fun.

The slot features 5 reels and 3 rows, with 243 paylines to begin with. However, over time this changes, giving room for the rows to expand and the paylines to reach an unbelievable 7,776! This is part of what makes this game so unique. You can expect an average RTP of 96.08%.

The most prominent special feature of the game is the possibility of getting up to 7,776 ways to win. How often do you come across that?

The game starts with a regular 5×3 layout and the customary 243 paylines. As you spin the reels, you will be on the lookout for the game’s Wild symbol – the Phoenix Wild. If you land it, it will trigger the Phoenix Rising Respins feature. As a result, three tiles will randomly disappear and a respin will occur with more possible ways to win. And if the respin lands you yet another Phoenix Wild symbol on the reels, this will retrigger the feature.

You can benefit from the Phoenix Rising Respins feature for as long as Wild symbols keep appearing on the reels. But there’s yet a better way to score big in Phoenix Sun.

The game offers one more bonus feature – the Freespins feature. To activate it, you will need collect a totalt of 5 Phoenix Wilds at the same game round (re-spins included), anywhere on the reels. It will award you a total of 8 freespins and the grid will expand to include the other three rows. So, finally you will be looking at 5 reels and 6 rows, with an obscene 7,776 ways to win.

This can effectively make for wins that reach up to 1,716 times your stake.

This Quickspin slot is certainly one of a kind and offers more ways to win than any other of the games by this manufacturer. The graphics are beyond satisfactory and create a pleasant playing environment. Gameplay is also rather straightforward and not too complicated. As for the bonus features – there aren’t many, but they’re enough. We estimate this game to be in the medium to high volatility range. The chance of hitting the free spins on any spin is 0.75%, which means that you are estimated to trigger the freespins feature once every 133 spins on average.