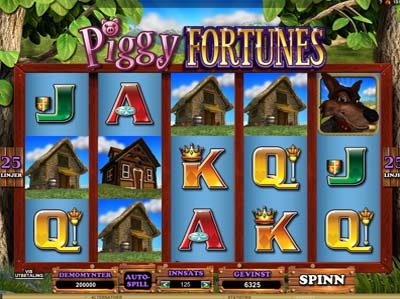 You’ve heard the tale of the three little pigs, right? Well, this game from Microgaming takes that nursery rhyme and presents a graphically pleasing slot game. Upon its reels, you’ll find various different icons. These exist primarily in the form of A, J, K and Q symbols. Alongside these, players will also find three different houses. Of course, these are the houses that the pigs built – one from straw, one from sticks of wood and another from stone.

The game itself is playable on five reels and three rows. While this is a familiar enough interface, Microgaming have also made sure to add 25 pay lines. These are set in a fixed position, so you cannot change them at all. However, you do have the option of altering your overall wager. Starting at £0,25 in total, you can increase this up to a maximum of £375 per spin.

The tale of the three pigs and the wolf wouldn’t be the same without some special features. The first of its specials is the scatter icon. This is the symbol of the three pigs themselves. Scatters pay out wherever they show up on the reels. If five of them come into view, you’ll receive a maximum pay out of 37,500 coins.

Joining the scatter symbol, there’s a wild icon. This is that of the wolf. As a wild, this one manages to stand in for all other icons on the reels. The only exception to this is the game’s scatter.

Finally, there’s the game’s ‘Big Bad Wolf’ feature and you’ll need to spin three, four or five of the scatter icons onto the reels to trigger this round. During this round, if the wolf appears adjacent to any of the house icons, he blows all the same types of icons down. When three or more scatters show up, they will rebuild any random house that has been blown down. Rebuilt houses award a wild multiplier.

The story of the pigs and the wolf is probably known very well throughout the world and it’s this Microgaming offering that brings it right into our gaming world. It does so with perfect graphics and intriguing gameplay.