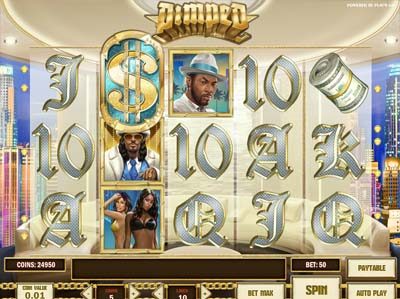 Backed by several professional rap and hip hop artists, Pimped presents you with all of the diamond-studded splendour of such artists. You’ll play this one from the luxury surroundings of your penthouse apartment, and on the game’s reels you will find several different symbols. These start with the regularly seen A, J, K, Q and 10 icons and continue on with symbols of a wad of money, a diamond ring, two sexy ladies and two rappers who very much resemble Xzibit and Snoop Dog. The former of these is obviously also the host of the MTV show, Pimp My Ride.

As far as the interface of the slot is concerned, you’ll be provided with a five reel and three row layout. Furthermore, the developer, Play’n Go, has incorporated 10 pay lines and you can change these to your own preferences. You can also adjust the bet value per spin, by altering your coin value between £0.01 and £2.00. The maximum overall wager you can place is £100 per spin.

There are just a couple of different specialities incorporated into Pimped, and these start with the wild symbol. This is represented by the rapper’s fist with a ring across his knuckles stating the world ‘WILD’, and it substitutes for all other symbols on the reels, except for the scatter. Five of the wilds appearing on a pay line will see you get the maximum pay out of 1,000 coins.

Furthermore, there is a scatter icon that has the form of a shining dollar sign. These icons pay out wherever they appear on the reels and three or more of them will provide you with five Win Spins, and these ensure a in on every single spin. A scatter appearing on the reels during this feature awards an additional two Win Spins. You are able to win up to 1,000,000 coins via this round.

This game allows you to play a few rounds of entertaining spins, and the special features – despite being quite standard – are intriguing enough as well.