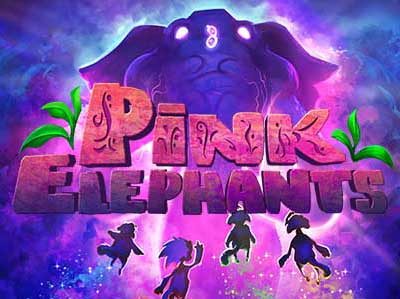 Pink Elephants is a slot machine brought to you by Thunderkick. And like many titles by this provider, Pink Elephants will be sure to impress with its appearance, unusual theme and setting, as well as its unconventional structure. Thunderkick has been known to deliver superb visuals and this slot makes no exception. The game apparently takes you to the African desert, and it’s a hot dry day with not a single cloud visible in the clear blue sky. In the foreground you can see some tree branches with actual green leaves on them. And to your left will be another small tree, sprouting leaves atop a rock. In addition, there is also a very pleasant soundtrack in the background. It will also reflect wins and feature triggers by becoming more dynamic, so it certainly won’t be boring either. 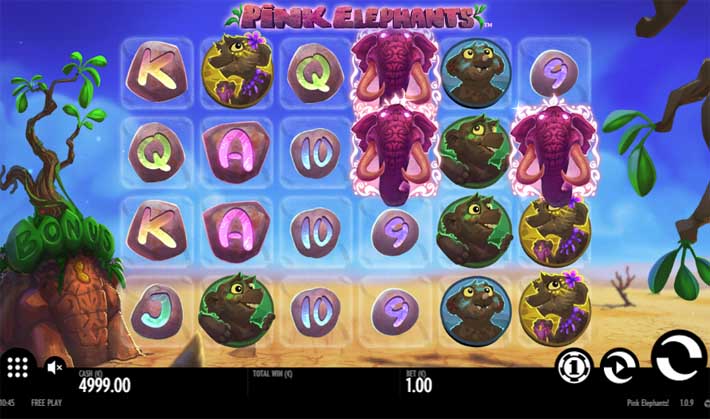 The symbols on the reels include the lower valuable slot icons. These are each carved into a stone and appear to be showing the crystal center of each stone. Hence, they also glow in different colors from pink to purple, orange and blue. The symbols we have in mind here are A, K, Q, J, 10 and 9. And moving on to the more valuable icons, these include odd little creatures, closely resembling meerkats. There are four meerkats in total, starting off with two youngsters, then moving on to a girl and lastly, the elder head of the family. The most lucrative symbol on these reels, however, is none other than the pink elephant icon. It actually resembles a mythical mammoth more, with enormous tusks and glowing gemstones for eyes. This brings us to the game’s layout, which also deviates from the standard. It features a total of 6 reels, instead of the customary 5, and 4 rows. In addition, there are a whopping 4096 ways to win! And stakes here are surprisingly flexible, starting at a minimum of only 10p per single spin. The highest possible betting amount on these reels will set you back £100 per spin. The slot RTP in Pink Elephants is 96.1%.

This title also features a Wild symbol of its own, in the form of a pink and sparkly ‘W’. Pretty much like all the rest of the icons on these reels, the Wild will be able to show up on every possible position, anywhere on the screen during gameplay. The Wild symbol will be able to stand in for any of the other icons on the reels. And in doing so, it will be contributing to winning combinations and potentially increasing your wins. However, there is one symbol that the Wild cannot substitute for and that is the game’s Scatter.

In turn, the Scatter is a glowing peanut symbol. It can also land in any position, anywhere on the six reels. But in order to for you to make the most of it, you will need to land at least 3 of these symbols all at the same time. Where they land is of little significance, but their number will determine the number of freespins you will receive as a result. 3 Scatters will award you the minimum of 7 freespins. If you land 4 or 5 Scatter symbols at the same time, you will receive 11 or 15 freespins, respectively. And last but not least, 6 Scatters will award you a total of 19 freespins. 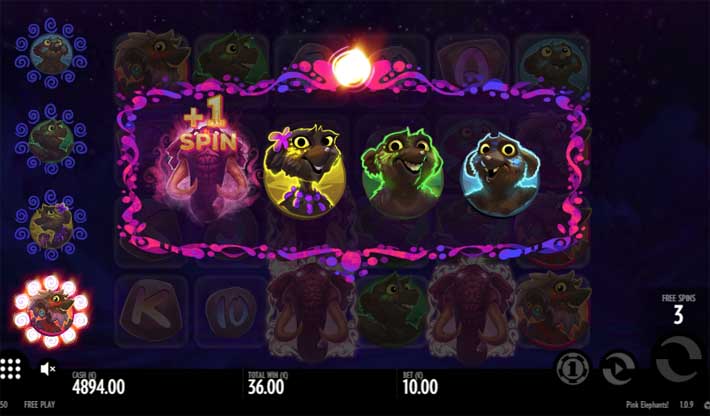 In the Bonus game, you will notice that some of the elephant symbols have glowing pink orbs on them. Every time they appear on the screen, the orbs will fly off to one of the symbol meters on the left. When you fill a symbol meter, that symbol will then be transformed into an Elephant symbol whenever it lands on the reels. In addition, you will also receive an extra freespin, after which the orbs will go to the next meter.

Furthermore, you can also retrigger the feature and gain more freespins by landing 2 or more Scatters. 2 Scatter symbols will give you an additional 3 freespins, whereas 3 and 4 will add another 5 and 7 freespins respectively to your total count. And Landing 5 or 6 Scatter symbols at the same time will award you an extra 9 or 11 freespins. 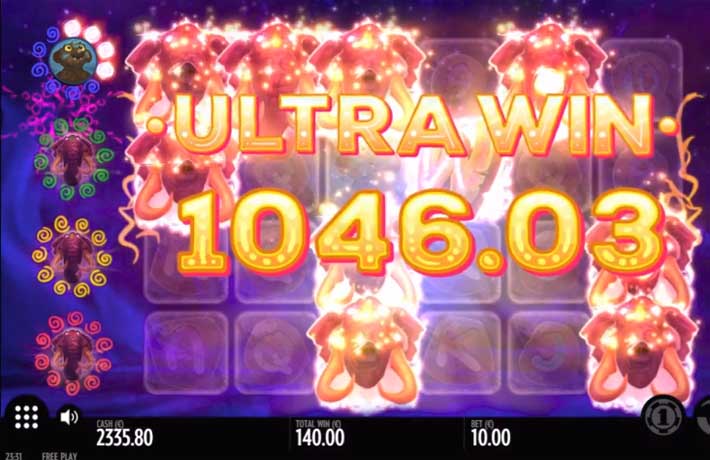 Despite seeming rather unusual and maybe even unique in the beginning, gameplay in Pink Elephants is actually quite simple. But thanks to the amazing visuals and cool extras in the freespins round, this title makes for a very fun and entertaining gaming experience nonetheless. But keep in mind that it may be a while before you actually get to trigger the bonus round. Once you do, though, the rewards can be very handsome. In fact, they can reach up to 8,200 times your total stake from just a single spin. With that in mind, be sure to watch out for your bankroll, as this is a very volatile offering.

Pink Elephants is very similiar to Raging Rhino from WMS, also a hugely popular slot machine. Thunderkick have created an excellent game with Pink Elephants and in our opinion it is one of the best slots they have ever created.